Scott Thomson has experience with Latin American markets, this is good for Scotia: John Aiken

Veritas Investment Research is cutting its price targets on the major Canadian banks due to concerns the Big Six will have to set aside more cash to cover potentially sour loans.

In a note to clients, Veritas financial services analyst Nigel D’Souza said that rising borrowing costs and a potential recession could lead to an increase in provisions for credit losses (PCLs), increasing the downside risks for shares of the big banks.

“We expect debt servicing costs to increase to a record high in 2023 and expect PCLs to accelerate and potentially peak in 2024 with inflationary pressures, rapidly rising rates, and provisions for performing loans under IFRS 9 likely pulling forward the recognition of PCLs.”

There are already signs the banks are socking away more cash to cover potentially sour loans – provisions for credit losses rose by $1.54 billion across the Big Six in the fiscal third quarter, nearly 10 times the $166 million increase in the prior quarter.

D’Souza said that increase in PCLs combined with higher costs will more than offset the benefits the banks reap from higher rates, which typically expand lending margins.

“We forecast a high single-digit decline in adjusted earnings for Canada's Big Six banks over the medium term with an increase in PCLs and higher expenses in an inflationary environment more than offsetting higher net interest income (NII) from margin expansion and loan growth,” he said.

While D’Souza did lower his 12-month price target on all six banks, he did upgrade Bank of Nova Scotia to a buy and reiterated that TD Bank is his top recommendation in the sector, citing the latter’s relatively higher leverage to a rising rate environment. 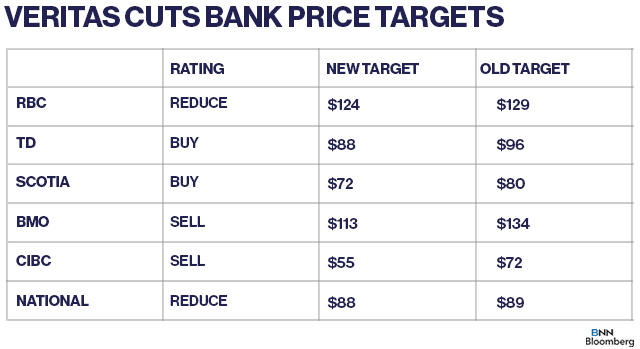 Overall, shares in the big banks have struggled this year, with all of the Big Six trading lower on a year-to-date basis. Scotiabank has been the laggard of the bunch, shedding about 26 per cent of its value in 2022 alone through early trading Tuesday.