The only alternative is foreign oil: NL Premier on aid to the oil sector

For Whiting Petroleum Corp. Chief Executive Officer Brad Holly, filing for bankruptcy had at least one perk: a US$900,000 pay raise.

Across the oil industry, leaders of failing companies are hitting the jackpot even in the aftermath of COVID-19 lockdowns that destroyed energy demand, crushed prices and threw almost 100,000 rank-and-file employees out of work.

Some 35 executives at Whiting, Chesapeake Energy Corp. and Diamond Offshore Drilling Inc. stand to share almost US$50 million in payouts as their companies careen toward -- or have already embraced -- bankruptcy protection.

Corporate directors defend the multimillion-dollar paydays as vital to preventing a scramble for the exits and retaining management teams with deep knowledge of the company’s assets.

But in an era of growing income inequality and social discord, the lavish compensation packages strike some observers as especially egregious.

“It’s this bizarre world where the CEOs drove the company into bankruptcy, but it’s important that the company pays them bonuses because they’re the only ones who can get them out of bankruptcy,” said Kelly Mitchell, an analyst for Documented, a corporate watchdog group.

“For some executives it’s resulted in massive payouts, far and above what they would have ever received if the company hadn’t filed for bankruptcy,” she said.

The disconnect between pay and performance is a long-standing sore spot in the world of oil and natural gas, according to veteran industry analyst Doug Terreson at Evercore ISI.

And the energy sector is more glaring about it than many other industries, he said.

The leaders of 15 large explorers raked in more than US$2 billion in aggregate compensation over the past decade despite a 15 per cent losing streak on a total return basis, Terreson’s research showed. By comparison, the S&P 500 Index returned 150 per cent.

To bank these top-dollar payouts, the trick has been for board compensation committees to compare their company’s performance to other energy companies, rather than the wider market, according to Terreson.

That narrowing of the field can mean management teams achieve their bonus targets even if investors incurred losses.

“CEO pay can remain high as long as management teams destroy less value than peers,” Terreson wrote in a note to clients.

Whiting’s Holly was awarded US$6.4 million when the former Bakken shale titan filed for Chapter 11 on April 1. The payout exceeded his previous annual compensation packages by almost US$1 million. It also came eight months after Holly fired one-third of the company’s workforce.

Given the crippling debt loads many explorers and drilling rig owners were shouldering even before the virus shuttered entire economies, a “substantial number” of companies are expected to seek protection from creditors in the next few months, regardless of whether crude prices recover, Haynes and Boone LLP said on Wednesday. 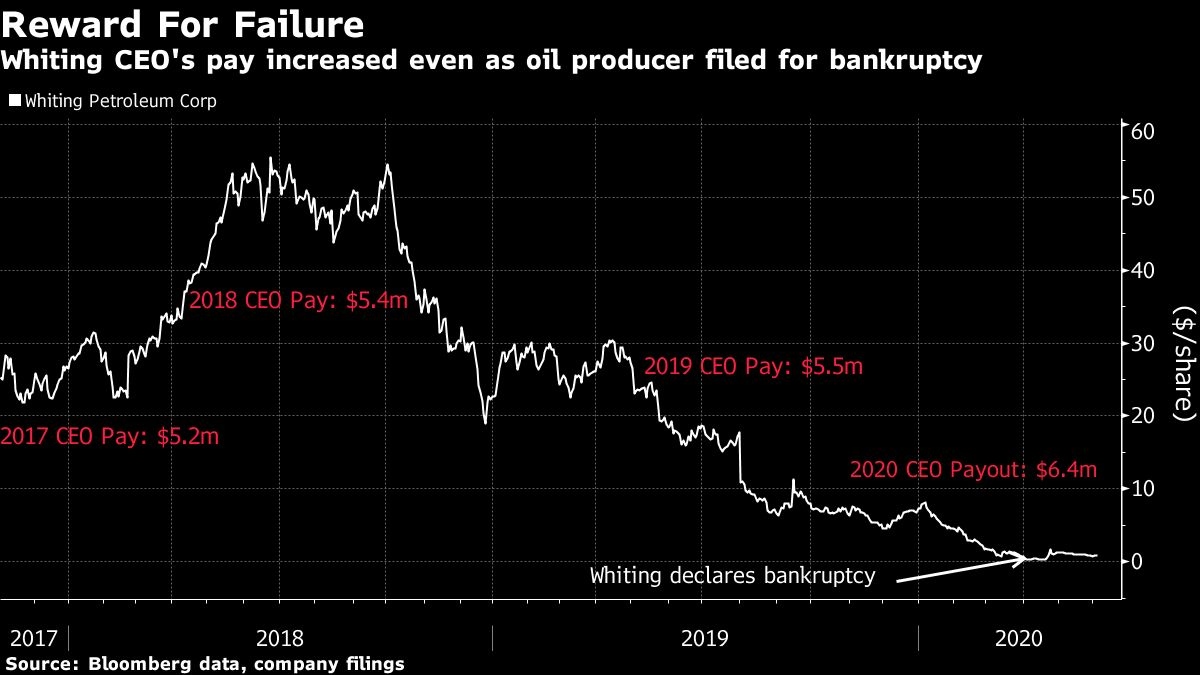 That, in turn, will mean more hefty rewards to keep management teams aboard, said Kathy Hipple, an analyst at the Institute for Energy Economics and Financial Analysis.

“There’s obviously a desire to keep management on through the bankruptcy process, but to give them these outsized bonuses is shocking to me and to many,” she said. “It doesn’t make any sense.

Will there be more? It certainly seems like it.”

Diamond Offshore, which has been cutting worker pay, plans to ask a bankruptcy judge next week to approve almost US$10 million in cash bonuses for nine executives.

That request has drawn particular scrutiny because it mirrors the amount Diamond Offshore claimed through a little-known provision in the CARES Act, which gives companies more latitude to deduct recent losses.

The proposed payouts are “perverse,” a committee of unsecured creditors said earlier this week in a filing with the U.S. Bankruptcy Court for the Southern District of Texas.

“I understand why people look at those packages and feel incensed,” said Mark Andrews, who leads Dykema Gossett PLLC’s bankruptcy practice group in Dallas. “But creditors are often in a vulnerable and time-pressured position.

If you have mass desertion, you have a real problem. So you tend to overpay.”

Even executives who have made bad decisions in the past often know “where the gold is buried,” to maximize value for creditors, such as tax credits or untapped resources, according to Andrews.

Without them, external consultants that cost up to US$1,500 an hour would have to be brought in for forensic analysis.

“The more you displace management as you’re hurtling toward bankruptcy, the more expensive it will be for everyone,” Andrews said.

There is some legal oversight meant to limit excessive payouts. Most bankruptcy bonuses must be approved by a judge, even if the arrangements pre-date the Chapter 11 filing.

They are also subject to oversight by the company’s board and the United States Trustees’ Office, a division of the Justice Department, after laws were introduced in 2005 to limit outsized payouts, according to Patrick Hughes, a partner at Haynes and Boone.

Still, the overwhelming trend to date has been for directors and judges to sign off on those bonuses.

“Everything revolves around value preservation,” said Hughes. “These are the executives who know these properties and can help maximize the sale value. They’re going to be working really hard during the bankruptcy process.”