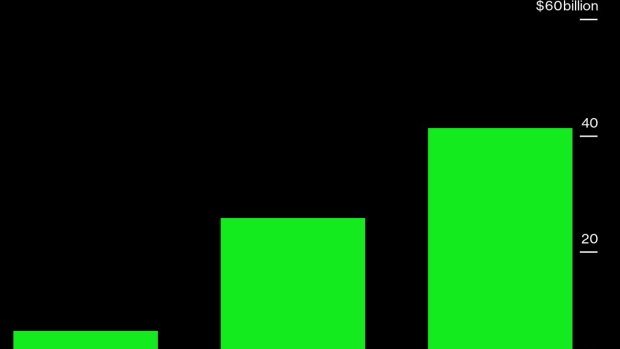 (Bloomberg) -- The world’s leading rater of green credentials is rewarding some of Wall Street’s biggest banks even though they continue to lend billions of dollars to fossil-fuel companies.

Those credentials come in the form of upgrades from MSCI Inc., which ranks corporations globally on environmental, social and governance criteria. In the past two years, Wells Fargo & Co., Citigroup Inc. and Morgan Stanley were among banks that got an ESG headline-rating upgrade for environmental reasons, even though the three banks arranged a combined $74 billion of loans for fossil-fuel companies.

Climate change, racial inequality and the growing wealth gap have created huge demand for ESG data on global companies. Adjustments to ESG ratings, which investors use to trade shares in a booming market for sustainable investing, can affect the flows of money invested in a company’s stock. Some $2.7 trillion now sits in sustainable funds, more than triple the amount from two years ago, according to research firm Morningstar Inc. That sum is expected to continue growing at a rapid pace.

Bloomberg News analyzed MSCI’s ESG rating upgrades given in the past two years to lenders in the S&P 500, a representative sample of companies in the world’s largest economy. The analysis found that 13 of 22 banks got upgrades, and almost half of those were because MSCI analysts took into account a “more granular breakdown” of the banks’ loans — meaning which industries get their loans.

Only three of the 22 lenders got an ESG rating downgrade: Zion Bancorp, Signature Bank and M&T Bank Corp.

Rather than measuring the total sums loaned to high polluters, MSCI analysts focused on how much those loans accounted for in a bank’s lending portfolio. For example, if a bank lent billions to an oil company but those loans represented a small part of its overall lending, MSCI would consider the bank to be greener — and worthy of a rating upgrade — compared with one that lent millions but whose loans accounted for a larger part of its overall portfolio.

Analysts at MSCI found that six firms — Wells Fargo, Citigroup, Morgan Stanley, Truist Financial Corp., Regions Financial Corp. and U.S. Bancorp — had only a small proportion (about 10% or less) of their total lending going to polluting businesses such as oil, gas and power companies or miners. What mattered more isn’t the total sum lent to these corporations, but the lending portfolio’s “environmental intensity,” which is how much environmental harm the firm could be on the hook for per dollar lent across its entire portfolio.

JPMorgan Chase & Co. was the only S&P 500 bank whose ESG rating upgrade in 2020 was driven largely by its green-lending practices. MSCI analysts noted that its green bond issuance in 2019 stood at levels “besting industry peers.” Since the Paris Agreement was signed in 2015, JPMorgan has underwritten more bonds for fossil-fuel companies than any U.S. bank. The company also ranks as the leading underwriter of green bonds in the same period among its domestic peers, according to data compiled by Bloomberg.

MSCI, which markets its ratings as a way to “build better portfolios for a better world,” said its ratings are tied to “relevant ESG risks.” MSCI’s ESG ratings measure how government regulations, legal judgments or other factors will affect those companies’ bottom line, rather than the risks the companies’ activities might pose to the world — a fact revealed by a Bloomberg Businessweek investigation published in December.

Read more: An investigation into the ESG ratings mirage

In a statement, MSCI said its ESG ratings “are used by institutional investors to better understand a company’s exposure to financially relevant ESG risks, not to measure a company’s total climate impact — we have other tools and data for that purpose. We are explicit about this investment management purpose and investors using our ratings understand and agree with our approach.”

But in a November interview responding to the Bloomberg investigation, MSCI Chief Executive Officer Henry Fernandez said even “many portfolio managers don’t totally grasp that.”

While the approach of considering risks to the company’s bottom line is an industrywide practice among ESG data providers, Bloomberg Intelligence estimates that 60% of all the money retail investors have plowed into sustainable or ESG funds globally has gone into ones built on MSCI’s ratings. So changes to those ratings can have outsized impact compared with ESG scores from competitors such as Sustainalytics or Bloomberg LP. (Bloomberg LP, which owns Bloomberg News, also provides ESG data and scores; it has a partnership with MSCI to create ESG and other indexes for fixed-income investments.)

In response to this article, MSCI said it takes into consideration the reputational risks that lenders face tied to their absolute sums lent to fossil-fuel companies. But its in-depth reports don’t explain exactly how the assessment feeds into the ESG rating.

Consider the example of Wells Fargo. The bank was the largest lender to fossil-fuel companies during the past two years, helping arrange $41.5 billion of loans, according to data compiled by Bloomberg. MSCI analysts found that Wells Fargo is only “involved in moderate controversy” tied to its lending to polluting industries and that its decision-making process for “incorporation of environmental due diligence” is in “line with industry best practices.”

Apart from the six banks that got headline-rating upgrades driven by loan-portfolio analysis, five other lenders in the S&P 500 got ratings upgrades from MSCI without taking any meaningful action. Instead, it was the result of MSCI changing how it calculates underlying scores of those lenders relative to peers. Those upgrades coincided with a spectacular run for the stock price of most Wall Street firms as global markets recovered thanks to economic stimulus from governments responding to the pandemic.