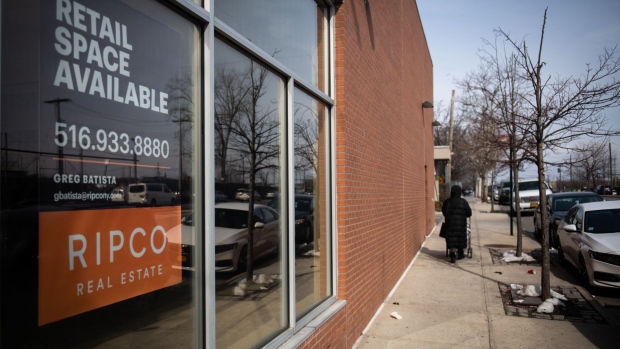 A "Retail Space Available" sign is displayed in the window of a closed JPMorgan Chase & Co. branch in the Bronx borough of New York, U.S., on Friday, Feb. 22, 2019. In the 13 months through January, JPMorgan has applied to open 185 new branches, with 71 percent of them in more affluent areas. The bank in that time has given notice to regulators of its intention to shut 187 branches. , Bloomberg

(Bloomberg) -- The number of U.S. bank branches dropped by a record 2,927 last year as lenders both large and small sought ways to cut costs and keep pace with a digital transformation sweeping the finance industry.

The tally includes the opening of more than 1,000 new locations and the shuttering of almost 4,000 existing branches, according to data from S&P Global Market Intelligence published Thursday. Net closures were up 38% from the previous record of 2,126 in 2020.

The shutdowns came in a two-year period when more and more customers switched to doing their banking online or through apps during the coronavirus pandemic. And competition from financial-technology firms and Wall Street giants, along with low interest rates that hurt profits, spurred regional banks to grow through mergers, leading to cutbacks in their branch locations. The aggregate value of bank takeovers exceeded $77 billion last year, the highest level since 2006, according to S&P Global.

“Banks have accelerated plans to consolidate their branch footprints as the Covid-19 pandemic encouraged consumer adoption of mobile and digital channels,” S&P Global’s Zach Fox and Umer Khan wrote in the report. “Further, banks have faced a tough operating environment with low interest rates pressuring margins and forcing a reconsideration of expenses.”