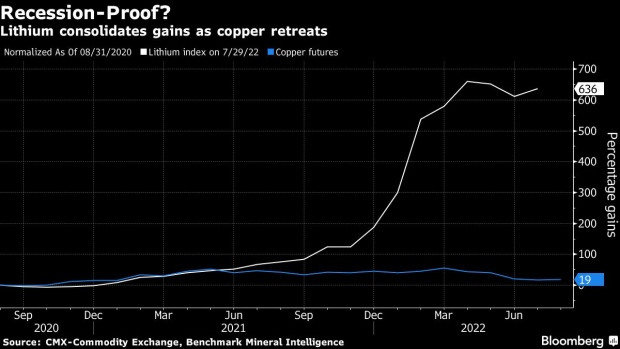 (Bloomberg) -- The good times will keep rolling for lithium producers in a market free of the slowdown fears that rattled other commodities in recent months, according to the second-largest supplier of the battery metal.

Reporting record quarterly earnings, SQM projected at least a 35% jump in demand this year, noting “very strong” electric-car sales in China in recent months. All that when new lithium supply has been slow to come onstream.

“As a result of this, we believe that the supply/demand balance will be tight for the remainder of the year and that this high price environment could continue throughout 2022,” the firm known formally as Soc. Quimica & Minera de Chile SA said in a statement late Wednesday.

The second quarter is showing the full impact of the lithium boom for SQM, just as the Santiago-based firm lifts output at a desert salt flat that is the world’s richest source of the metal. As the clean-energy transition gains momentum, the company has been able to lock in high prices in contract renewals, cushioning the blow of cost inflation. Earnings before items surged sixfold to a record $1.3 billion in the second quarter.

Still, SQM shares were down 7.1% at 10:07 a.m. in New York after adjusted profit came in slightly below expectations, exacerbating a broad market sell-off. The stock has more than doubled in value this year, by far the best performance among global peers.

As other metals wilt in the past few months on concerns of slowing growth, lithium is holding up. Prices that have gained sevenfold in the past two years may even get a further boost as a drought-induced power crisis in China’s Sichuan province sparks supply disruption fears.

While the lithium supply-side generally is struggling to keep pace with demand, SQM raised its sales guidance for this year to at least 145,000 metric tons, saying it’s close to reaching lithium carbonate capacity of 180,000 tons en route to its 210,000-ton target.

Management is scheduled to hold a call with analysts at noon local time.