A torrential selloff in government bonds is darkening the outlook for the biggest corporate debt exchange-traded fund.

Short interest as a percentage of shares outstanding on the US$45 billion iShares iBoxx $ Investment Grade Corporate Bond ETF (ticker LQD) clocks in at 18.7 per cent, up from 5.9 per cent at the start of the year, according to data from IHS Markit Ltd. That’s the highest level on record for the fund, which has dropped roughly 5 per cent so far this year.

Appetite for LQD has been souring as the vaccine rollouts combined with the prospect of an additional US$1.9 trillion of fiscal aid boosts inflation expectations. That helped fuel a spike in long-dated Treasuries this week, shining a spotlight on LQD’s relatively high duration of 10 years -- a measure of sensitivity to interest rate changes.

“If we feel that interest rates now have the opportunity to be either flat or move higher, we want to reduce our interest-rate sensitivity. So you’ll be selling that intermediate, high-quality ETF and moving your positioning down the curve to something that’s shorter duration,” said Wayne Wicker, chief investment officer at Vantagepoint Investment Advisers. “Shorting it would be the other way to play it -- that’s the other way you could bet on rising interest rates.” 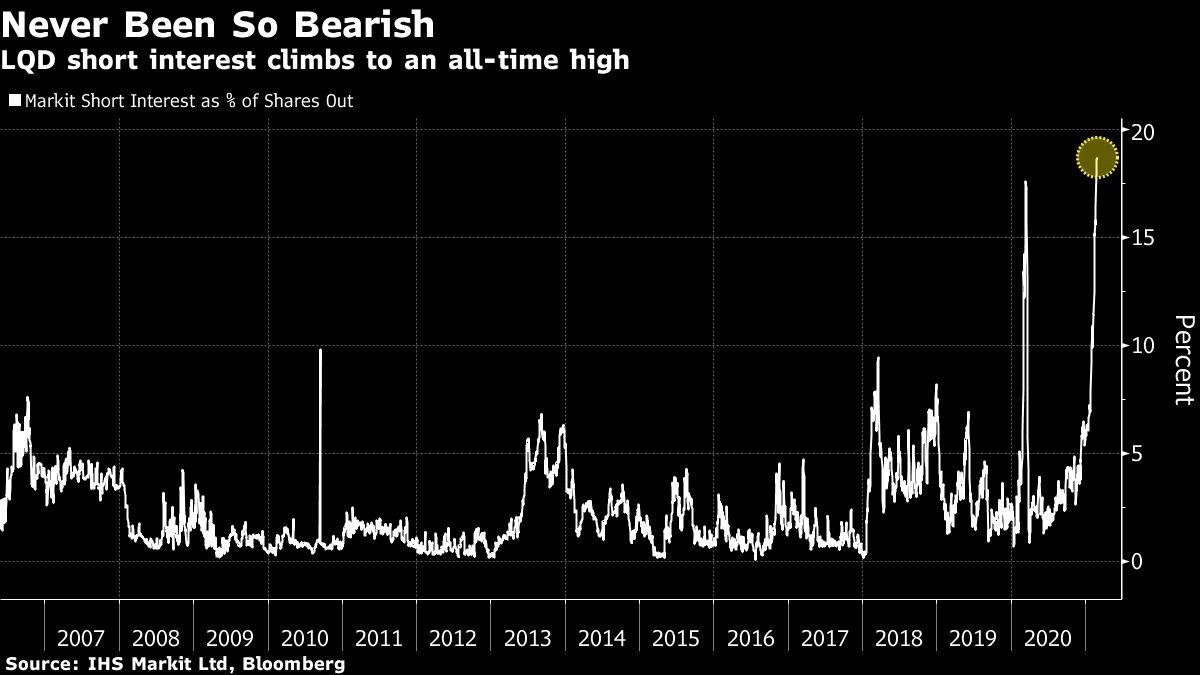 LQD is down 1.4 per cent this week, on track for its worst performance since January. The bulk of those losses came on Thursday as poor demand at an auction of 7-year Treasury notes briefly sent benchmark rates to the highest level in a year, rattling financial markets broadly.

At a certain point, the selloff in high-grade corporate debt will create an attractive entry point for the asset class, according to John Hancock Investment Management’s Emily Roland. Based on the past decade of the Bloomberg Barclays US Aggregate Bond Index, drawdowns in bond markets rarely exceed 4 per cent to 6 per cent, she said.

“We could expect to continue to see some pressure there,” said Roland, the firm’s co-chief investment officer, who added that as Treasury rates continue to rise “that can provide an opportunity as well.”

“We often remind our clients that bear markets in bond markets are often baby bear markets,” Roland said, “whereas they’re often much bigger in equities.”