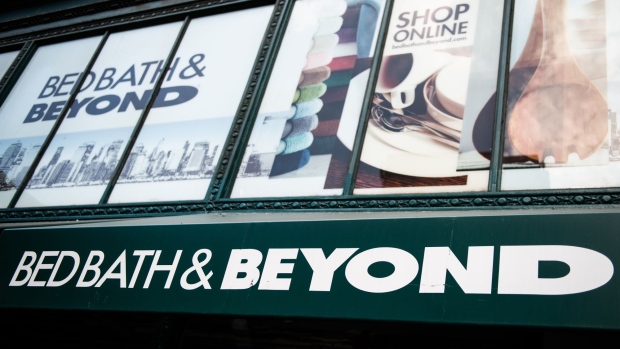 Bed Bath & Beyond Inc. shares soared to the highest level in more than two years after the home-goods chain posted a surprise gain in quarterly sales, a sign investors believe that turnaround efforts are paying off ahead of the holiday season.

Comparable-store sales, a key metric, rose 6 per cent in the second quarter ended Aug. 29. Analysts had expected a decline of 1.3 per cent, according to Consensus Metrix. Sales continued to increase last month, according to the company.

“We see things are taking hold and those green shoots that developed in the quarter are turning into trends in September,” Chief Executive Officer Mark Tritton said in a phone interview.

The company’s bonds also jumped. The 5.165 per cent notes due 2044 rose more than eight cents to trade at 82.625 cents on the dollar for a yield of 6.6 per cent, according to Trace bond trading data.

Revenue of US$2.69 billion beat the average estimate from analysts, with e-commerce underpinning the improvement and offsetting a decline of in-store sales. Jonathan Matuszewski, an analyst at Jefferies, said COVID-related demand appeared to be the “overriding driver” of the performance.

As the critical holiday season approaches, the retailer is adding more services for consumers who may opt to continue shopping online. Earlier this week, it announced the start of same-day shipping and is also focused on getting popular kitchen items to customers quickly, Tritton said. Kitchen and college-related items have sold well, while luggage and travel goods haven’t, he added.

“Going into the holiday season, we think it’s still going to be around the home,” Tritton said. He anticipates that holiday sales will spread throughout the season, which helps avoid shipping strains.

Bed Bath & Beyond continues to pursue a multiyear revamp to shake off years of stagnation and decline. Tritton is cutting costs and changing the chain’s focus to initiatives like curbside and in-store pickup for online orders. An improvement in gross margin, spurred in part by refocusing on more-profitable merchandise and the curbside initiative, indicates that the efforts are gaining steam.

The company said it would share more about its future plans at an investor day at the end of the month.