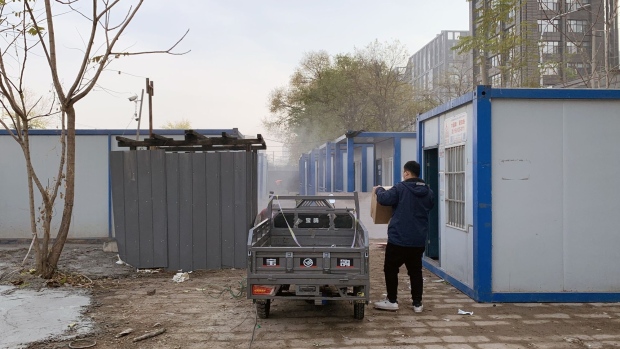 A temporary Covid quarantine facility under construction in Beijing on Nov. 23. , via Bloomberg

(Bloomberg) -- Signs of Beijing’s looming battle with Covid are cropping up in the heart of China’s capital.

On a residential street just south of the central business district, workers are constructing a temporary Covid quarantine facility of prefabricated structures the size of shipping containers. A few kilometers to the north, green tents are popping up in a park that could be used to house epidemic control staff. A conference center has been converted into a makeshift hospital.

The building boom is a visual manifestation of the preparation that’s underway to combat the city’s growing outbreak, which climbed to a record 1,611 new cases on Wednesday - a relatively small number for a city of 22 million, but enough to send panic through the capital of a country that’s largely kept the virus out for more than two years.

The Chaoyang district, where the makeshift quarantine center is being hastily erected, is edging closer to a lockdown, with apartment buildings across the district shuttered. Residents have been asked not to leave Chaoyang or Beijing unless absolutely necessary.

Panic-buying appears to have descended, with supermarket delivery apps like Alibaba Group Holding Ltd.’s Freshippo -- known as Hema in Chinese -- and Walmart Inc.’s Sam’s Club running out of capacity to deliver on Thursday, and other grocery outlets in the district no longer taking orders.

China’s construction prowess in the Covid era is well established, starting with the erection of hospitals in just 10 days in Wuhan during the first wave of the pandemic. The measures now being taken in Beijing suggest officials there believe more infrastructure will be needed to handle its flareup, which is coming just after the release of new measures intended to refine the country’s strict Covid Zero approach.

Infections nationwide hit a high on Wednesday, with 29,754 new local cases reported. That number eclipses the outbreak earlier this year in Shanghai, when the city’s 25 million residents were locked down for two months or longer to get infections back under control.

In Chaoyang, more than 30 portable cabins and two toilets were already in place on Wednesday morning when a Bloomberg reporter visited. A man in white protective clothing who was guarding the site said it was a going to be a fangcang, or temporary quarantine facility used to hold people infected with mild or no symptoms.

It wasn’t clear how large the facility was going to be, although additional space was available to accommodate more cabins in the concrete lot between the road and the train tracks. An official at the local residential office across the road said he wasn’t involved in the effort and had no idea what was being constructed.

Photos of the construction site and the separate encampment of green tents in a park to the north have been circulating on Chinese social media this week. In response to online posts about the tents, the city government’s own newspaper ran an interview with an unnamed official denying the tents were a fangcang.

The tents don’t have a medical purpose but may be used as temporary accommodation for epidemic control staff or something similar, the official said, adding that they’d been prepared just in case. The article didn’t mention the white cabins being installed in the southeastern part of the district.

A sign at that park entrance said it shut Nov. 18 due to the pandemic, but at least 20 tents were visible just inside the gates on Wednesday when a Bloomberg reporter visited.

In addition to these temporary facilities, the national convention center on the outskirts of Beijing has been turned into an isolation facility, officials announced Wednesday afternoon.

China’s well-honed Covid Zero strategy relies on isolating everyone who is infected and all of their close contacts in hospitals or specialized facilities until there is no risk they are infectious. Cities such as Shanghai that had large outbreaks built mass quarantine centers or repurposed convention centers and other large buildings to contain people.

It’s not entirely clear how many - or which - people will be using any of these facilities, but the need for space to isolate the infected is growing. A rising number of individual apartment buildings across the city have been locked down due to confirmed or suspected cases, with the infected and those who have been in close contact with them sent to hospitals or to quarantine. Everyone else is confined at home and tested.

Previously, everyone in the entire housing complex would be locked down. Now the government is limiting that to specific buildings within compounds, in an apparent attempt to minimize disruption, even as it continues to try to contain the outbreak and stamp out all infections.

--With assistance from Dong Lyu and Claire Che.