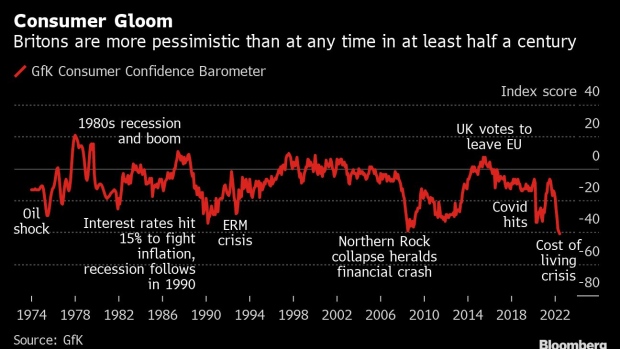 US President Joe Biden, left and Boris Johnson, UK prime minister, at the family photo on the opening day of the Group of Seven (G-7) leaders summit at the Schloss Elmau luxury hotel in Elmau, Germany, on Sunday, June 26, 2022. Issues on Sunday's formal agenda include the global economy, infrastructure and investment and foreign and security policy, while a number of bilateral meetings are also planned. , Bloomberg

(Bloomberg) -- On a sun-baked stage in the lush green grounds of a grand hotel in the Bavarian Alps, there was a conspicuous absence on Sunday evening. Boris Johnson had, just hours before, been confirmed to appear at a Group of Seven event on global infrastructure and investment, where he’d speak alongside US President Joe Biden. But he didn’t show -- his team saying it didn’t work with his schedule.

The decision not to appear was clearly a last-minute one. European Commission president Ursula von der Leyen, standing alongside Biden and four other world leaders, referred to “Boris” in her speech as if he were there.

It’s unclear how Johnson spent the time instead. But it came as his advisers faced questions about the premier’s relationship with Biden given there is no plan currently for a bilateral meeting at either the G-7 summit in Germany or the NATO gathering that follows in Madrid.

The long-running and oft-cited US-UK “special relationship” means a one-on-one chat usually happens at such events. And Biden and Johnson have for months worked closely on Ukraine, especially on sending weapons in to help it fight Russia, even as France and others suggest President Volodymyr Zelenskiy should keep the door open to talks with Vladimir Putin.

Both the UK and US played down rumors of any row: A US official said there would be multiple opportunities for leaders to interact at dinners and on the margins of the sessions, a line repeated by the prime minister’s spokesman. Johnson had a cordial chat with Biden before the side event and told him he wouldn’t be appearing, a person familiar with the matter said.

Still, the lack of a bilateral sit down so far stood out, particularly given their public chumminess at last year’s G-7 summit at the English seaside. Back then Johnson hailed Biden as a “breath of fresh air” after Donald Trump’s turbulent administration. Even then, differences loomed -- not least on the UK premier’s handling of the aftermath of Brexit and concerns that any move to tear up the Northern Ireland protocol on trading arrangements with Europe could risk the delicate peace process in the country.

Johnson’s trip to the White House in September laid bare the strains. In front of the media, Biden made clear he was putting a US-UK trade deal on the back burner -- a move that undermined the British prime minister in the clearest possible terms. For Johnson, it meant that one of his big promises of Brexit was in jeopardy.

The UK premier also came to this summit in Germany on the back foot domestically, having recently survived a no-confidence vote from his own lawmakers and with his Tories losing two key by-elections in one day. A burgeoning cost of living crisis in the UK, with inflation at 40-year highs, is set to keep the pressure on and the attacks from his own ranks and the Labor opposition coming.

While lawmakers are set to debate the prime minister’s controversial new law that would give ministers the power to unilaterally rewrite the bulk of the Northern Ireland protocol, behind the scenes his Conservative MPs are also discussing the future of their leader.

The by-election losses have galvanized Tory rebels to try and find new ways of giving Johnson the boot. The premier is theoretically safe from another confidence challenge for a year, under the rules of a group of influential backbenchers known as the 1922 Committee. But elections are coming for that committee’s executive, which could see it run by lawmakers willing to change the arrangements.

Out of the country for more than a week as he hops from meetings in Rwanda to the G-7 and onto NATO, Johnson appears eager to focus on other matters than his troubles at home.

He had a long chat with French President Emmanuel Macron after a group dinner on Sunday, two people familiar with the matter said, where they each enjoyed a glass of Bavarian whisky. Johnson was also caught on camera earlier in the day joking about the weather and Russia when the leaders sat down for their first session of the summit on the global economy.

Noting the sunny alpine weather at Schloss Elmau, Johnson mused if leaders should take their jackets off or whether they needed to show “we’re tougher than Putin”. When Canadian Prime Minister Justin Trudeau jumped in with “bare-chested horseback ride” -- a reference to Putin’s infamous shirtless horse rides, Johnson responded: “We’ve got to show our pecs.”

Yet an official UK summary of Johnson’s bilateral meeting on Sunday with Macron suggested there were tensions over Ukraine. Johnson stressed that any attempt to settle the conflict now would “only give Putin license to manipulate both sovereign countries and international markets in perpetuity” -- remarks interpreted by British newspapers as a swipe at Macron.

The pair failed to discuss the controversial issue of asylum seekers crossing the English Channel from France -- a topic that has raised tensions between the two countries. There was also an odd moment when Macron told Johnson about the French proposal for a European political community, by which countries from Iceland to Ukraine could be included in a broad union. Johnson replied that he’d been the first to propose that, to which Macron said, according to French officials, he’d “leave it to you.”

Another French official, asking not to be identified discussing private matters, said things with Johnson have always been complicated.

Months after the G-7 summit in Cornwall, it emerged a deal had been struck there for Australia to walk away from a contract to buy French submarines in favor of nuclear-powered vessels from the US and UK. The subsequent public row with Macron led Johnson at one point to tell him to “prenez un grip.”

If anything Johnson’s best rapport so far at the G-7 may be with the host, chancellor Olaf Scholz -- despite disagreements with Germany also over Brexit. On Sunday afternoon he and Scholz walked down the grassy path from Schloss Elmau, tieless and gesturing at the Alpine scenery.

As camera crews got close, Johnson called out: “Whoa whoa! You’re not meant to be listening in!” The pair kept walking across a meadow, past wildflowers, and later took off their jackets as they strolled back up the hill.