The Bank of Canada’s firmly entrenched holding pattern on rates will be put to the test by the country’s ability to withstand a deceleration in the world’s largest economy and its biggest trading partner.

The Ottawa-based central bank left the overnight rate unchanged at 1.75 per cent on Wednesday for a sixth straight decision, and indicated it’s in no rush to introduce easier policy, despite a mounting drag from the U.S.-China trade war and a widely-anticipated interest rate reduction by the Federal Reserve later this month.

Canada doesn’t need to follow the Fed in large part because its growth will be superior to that of the U.S. without additional monetary accommodation, according to policy makers. The central bank forecasts a pick-up of 1.9 per cent growth for the Canadian economy in 2020, from 1.3 per cent this year, and for U.S. activity to tail off to 1.7 per cent, from 2.5 per cent.

That might sound like divergence, but “in fact, it’s a process of convergence,” Carolyn Wilkins, Bank of Canada senior deputy governor, said in a press conference.

Deep trade linkages have ensured a high degree of historical synchronicity between Canadian and American economic performance, with episodes of decoupling arising over the past decade due to major commodity price shocks and differences in the timing of fiscal stimulus. Indeed, the consensus among economists surveyed by Bloomberg is for both economies to expand by 1.8 per cent in 2020.

Canadian growth is supported by a monetary policy stance that’s currently more stimulative than in the U.S., while domestic-centric headwinds related to housing and the energy sector look to be ebbing.

“It’s entirely consistent for Canada, in this circumstance, to grow just a little bit faster than the U.S. as we adjust towards potential from below and they adjust from above,” said Wilkins.

That’s an apt diagnosis, according to Toronto-Dominion Bank senior economist Brian DePratto, who sees the central bank on hold through 2020. If anything, the Bank of Canada is “setting a low bar” for the near-term growth outlook, he said, which will help bolster the case for keeping rates on hold.

“With easing going on south of the border and the bleed through in funding conditions, that does sort of prime things for a bit of a return to that growth pattern with housing and consumption,” he said. “And then you’ve got the ‘human stimulus’ argument -- Canada’s continuing to have healthy population growth, which translates into labor force and job gains.”

Most economists who track the Bank of Canada also expect rates to be on hold through 2020. That sets Governor Stephen Poloz up for a poetic pause. If the current holding pattern on rates lasts through the first half of 2020, he’ll be poised to end his seven-year term just as he started it: with more than a year and a half of unchanged policy.

But traders aren’t completely on board with the message. A 25 basis point rate cut isn’t fully priced in over the next year, though the implied odds of an ease roughly doubled to 80% on Wednesday in the wake of the central bank’s decision in concert with dovish remarks from Fed Chair Jerome Powell. 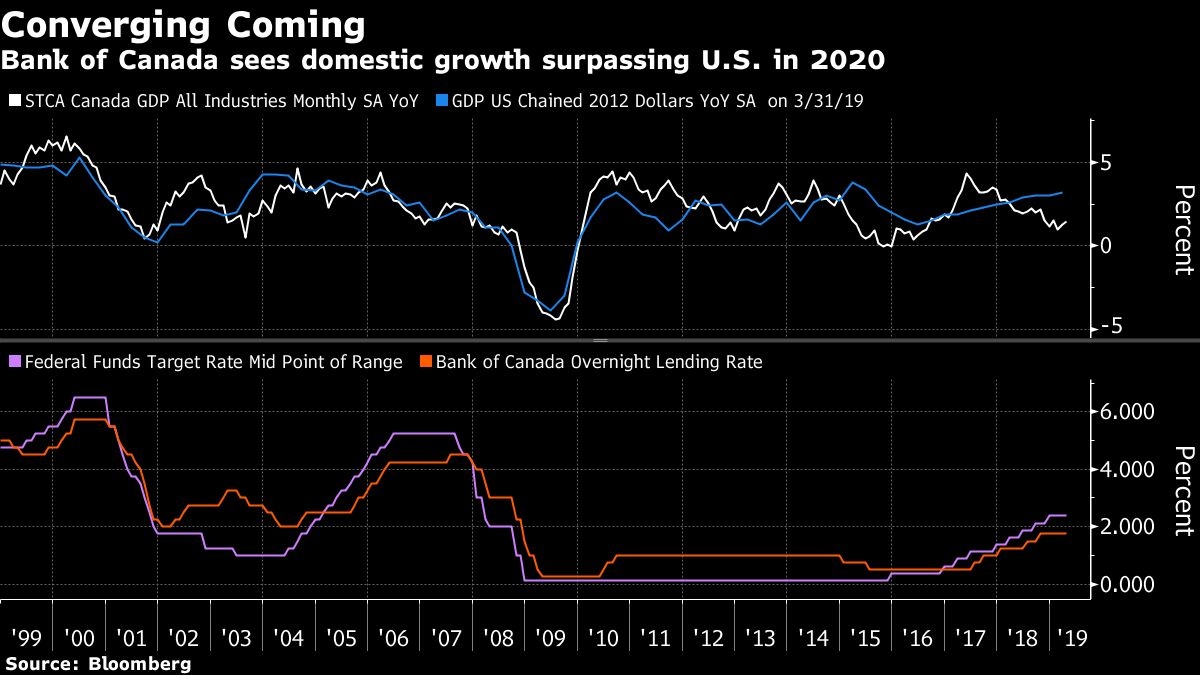 Canada has imported easier financial conditions in the form of lower bond yields without matching the extent of the dovish turn taken by central banks globally. But the nation hasn’t been a complete free-rider on this trend, according to Avery Shenfeld, chief economist at Canadian Imperial Bank of Commerce.

Five-year bond yields -- which tend to move along with five-year fixed mortgage rates, the dominant product in the Canadian real estate market -- have some degree of Bank of Canada easing baked into them, which will reverse if the central bank fails to deliver.

“It’s reasonable, for now, for the Bank of Canada to not give too many clues one way or the other on interest rates, as they had this wisdom of not hiking as much as the Fed,” Shenfeld said. “But there will be enough of a global slowing that the impact on Canada from that, coupled with the threat of Canadian dollar appreciation if the Bank of Canada stays on hold forever, will be enough to prompt a token ease.”

CIBC expects a cut in the second quarter of 2020.

Macquarie Capital economist David Doyle agrees, pointing to a nasty shock awaiting Canadians poised to renew mortgages next year, a stark contrast to the limited stress on those doing so this year.

“It’s funny to me that the BoC, in their growth model, indicates a big part of the inflection in growth you’re getting is coming from residential investment, and also have consumption relatively stable,” he said. “That strikes me as odd because of that rate reset headwind -- which was specifically brought up as an element that’s supporting activity in the current year -- becomes a wall of a headwind as you move into 2020.”

Disappointing growth in 2020 will elicit rate cuts starting in the middle of the year, concludes Doyle. That’s because this time, unlike in 2018, Canada won’t be able to ride the coattails of a booming economy stateside.