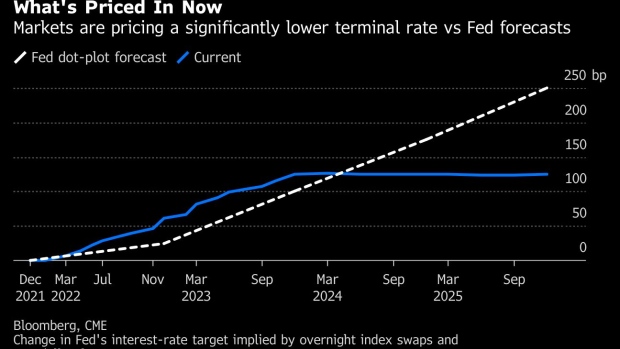 (Bloomberg) -- Traders are increasingly betting that the Federal Reserve’s cycle of interest-rate hikes, which hasn’t even gotten underway yet, will fizzle out sooner rather than later.

Parts of the curve for eurodollar futures, which among other things are used by traders to bet on the direction of central bank policy, have been inverting over recent days. The rate on the December 2025 contract dropped below December 2024’s earlier this week and on Friday reached as much as 3.5 basis points lower.

Perhaps more notably, there was an inversion even closer than that, with the gap between the future for December 2023 and the contract for the final month of 2024 flipping for the first time since March 2020. In short, that means that the Federal Reserve rate could start flatlining by the end of 2023. And with actual hikes not predicted to begin until a few months into 2022 at the earliest, that makes for a relatively abbreviated cycle.

The latest aggressive bull flattening move in eurodollar futures came in the wake of America’s most recent jobs report, which showed less growth in payrolls than most people had predicted. Rates on contracts in the so-called blue pack sector of the eurodollar curve -- those that point to late 2024 and much of 2025 -- tumbled by around 10 basis points on the day as traders rethought the outlook for policy, which has been whipsawed this week by a hawkish pivot from Fed Chair Jerome Powell.

The market has shown that it’s willing to take Powell’s lead up to a point and is pricing around two quarter-point hikes for 2022. But the longer-term horizon is looking shakier, with just five quarter-point increases priced by the end of 2025. That’s around half of what’s indicated by the most recent median forecast of Fed officials.