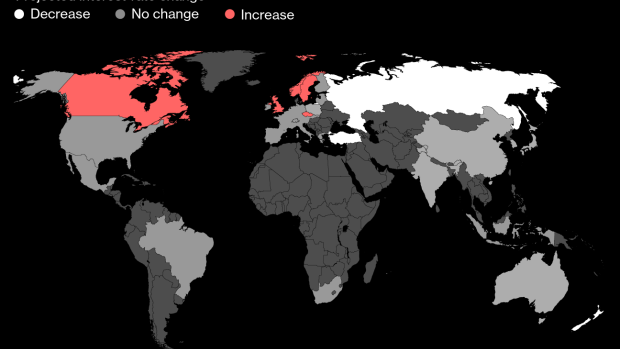 (Bloomberg) -- Global finance chiefs ended talks in Washington mixing concern toward the current state of the world economy with confidence that it will soon rebound.

The shift away from tighter monetary policy by central banks, recent stimulus in China and easing trade tensions were hailed as reasons to hope the slowdown will prove short-lived although nobody forecast a renewed boom.

With stocks already rallying on optimism about the outlook, officials at the International Monetary Fund’s spring meetings said growth is set to “firm up.” IMF Managing Director Christine Lagarde nevertheless warned the world is at a “delicate moment,” and at risk of “self-inflicted wounds.”

“It’s a time that’s characterized by very high uncertainty,” World Bank chief economist Pinelopi Koujianou Goldberg said in an interview. “It’s not a time where people are bullish about the global economy. People don’t feel that we’re in a major crisis, either.”

Here are the main takeaways:

The IMF cut its forecast for global expansion to the slowest pace since the financial crisis a decade ago, but played down the risk of recession and predicted growth will pick up in the second half of the year to stabilize at about 3.6 percent in 2020. That would be an improvement over the 3.3. percent pace projected for this year, but below the 3.8 percent of 2017.

U.S. Treasury Secretary Steven Mnuchin stoked optimism by saying he was hopeful the U.S. and China are “close to the final round” of trade talks. U.K. Chancellor of the Exchequer Philip Hammond said the government and main opposition party could strike a Brexit deal within weeks.

Europe’s struggles again emerged as a source of worry, leaving Germany under pressure to ease fiscal policy and the U.K. to arrange its withdrawal from the European Union. Still, European Central Bank President Mario Draghi was cautiously optimistic in arguing the euro-area has shown “remarkable resilience.”

President Donald Trump’s bashing of the Federal Reserve -- which he renewed with a tweet on Sunday claiming stocks would be much higher had it not been for its actions -- had policy makers circling the wagons in defense of central-bank independence.

Draghi took the rare step of wading into politics to back the Fed. He said he was “certainly worried about central-bank independence,” especially “in the most important jurisdiction in the world.”

Tobias Adrian, the head of the IMF’s monetary department, warned that political meddling in central banks “would be dangerous.” The Fed is set up so that its senior officials “don’t have to listen if they get calls” from politicians, he said.

The recent weakening of the world economy has prompted some out-of-the-box thinking, but not all in Washington were convinced.

The doctrine known as Modern Monetary Theory got a rough ride. It argues that countries that have their own central banks and borrow in their own currencies -- like the U.S. and Japan -- can’t go broke, and so don’t need to worry about overspending as long as it doesn’t fan faster inflation.

“Fiscal policy is a very important part of the tool kit for policymakers,” said IMF chief economist Gita Gopinath. “That said, there is no free lunch. There are limited to how much countries can spend.”

Lagarde conceded that the approach may have merits in situations where nations are facing deflation although she said no country is in such a position.

Former Treasury official David Malpass turned over a new leaf in his debut as the new president of the World Bank. Inside Trump’s Treasury, he questioned whether international cooperation had gone too far, and took issue with China’s borrowing.

Since taking the helm of the development lender, however, Malpass has adopted a more conciliatory tone. He said he’s not planning a restructuring at the bank, and he pledged to work constructively with China.

“China has been hugely successful at reducing extreme poverty,” he said. “China has some lessons to share.”

Over at the IMF, governments didn’t showing appetite for increasing its capital. While the lender’s main advisory panel noted the importance of an “adequately resourced” IMF, it said final decisions will be left to meetings in October.

To contact the reporter on this story: Andrew Mayeda in Washington at amayeda@bloomberg.net

To contact the editors responsible for this story: Simon Kennedy at skennedy4@bloomberg.net, Alister Bull