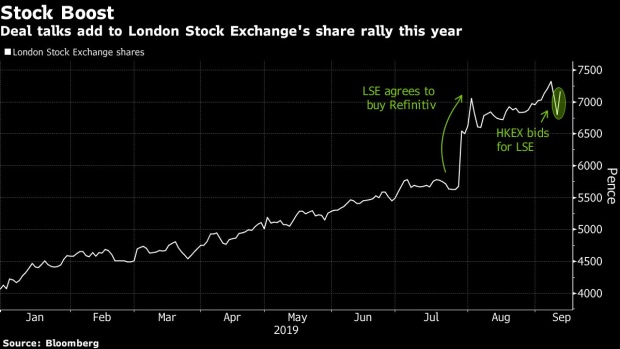 (Bloomberg) -- Hong Kong Exchanges and Clearing Ltd.’s $36.6 billion takeover bid for London Stock Exchange Group Plc faces serious political hurdles, and could lead to a competing offer from a rival, such as Intercontinental Exchange Inc. or CME Group Inc., according to market participants.

The offer seeks to drive a wedge between LSE’s planned combination with data provider Refinitiv, which was well-liked by investors. The U.K. exchange said it will consider the unsolicited proposal and remains committed to Refinitiv.

An initial 16% jump in LSE shares on Wednesday pared to about 5% in the early afternoon as investors considered the likelihood and ramifications of any Hong Kong deal, including the political and national security concerns of partial Chinese state ownership. The stock is up 77% this year.

Here’s what investors and analysts had say about the bid:

--With assistance from Paul Jarvis.

To contact the editors responsible for this story: Beth Mellor at bmellor@bloomberg.net, Kasper Viita