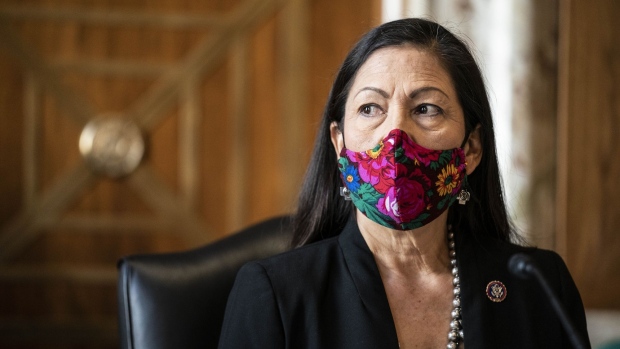 Representative Deb Haaland, a Democrat from New Mexico and secretary of the interior nominee for U.S. President Joe Biden, wears a protective mask before testifying during a Senate Energy and Natural Resources Committee confirmation hearing in Washington, D.C., U.S., on Wednesday, Feb. 24, 2021. Haaland downplayed her past opposition to fracking during a heated hearing yesterday as she sought to reassure senators worried she would clamp down on fossil fuel development. , Bloomberg

(Bloomberg) -- The Senate energy committee voted along near party lines to advance President Joe Biden’s Interior secretary nominee, over the objections of Republicans who said Deb Haaland’s past opposition to fossil fuels made her unfit to serve as the chief U.S. manager of hundreds of millions of acres of federal land.

That territory is prime real estate for oil and gas development -- as well as hiking, grazing and conservation -- and Republicans said entrusting that land to Haaland could mean forfeiting its energy potential.

“If she’s allowed to to pursue her Green New Deal-inspired policies at the Department of Interior, she will run Wyoming and other states’ economies into the ditch,” Senator John Barrasso, a Republican from Wyoming. “Representative Haaland’s extreme policy views and lack of substantive answers during the hearing, to me, disqualify her for this job.”

Haaland’s nomination to lead the Interior Department now heads to the Senate floor, and she is widely still expected to be confirmed. She won the support of all 10 Democrats on the Energy and Natural Resources Committee, including moderate Joe Manchin of West Virginia, whose vote is viewed as critical in the 50-50 Senate.

“While I may not personally agree with some of her past statements and policy positions, as secretary, she will be carrying out President Biden’s agenda,” Manchin said.

Senator Lisa Murkowski, a moderate Republican from Alaska, voted to support Haaland, despite concerns about how she would oversee oil development on federal land in her home state. It was a struggle, Murkowski acknowledged, given the oil development concerns and the pride “so many Alaskans, Alaska Natives in particular” have about such a historic nomination.

Haaland would be the first Native American secretary in any president’s cabinet if confirmed.

Haaland’s nomination has been championed by environmentalists and tribal leaders who say it’s long past time for a Native American to lead the agency that holds trust title to 56 million acres for tribal nations. Interior’s Bureau of Indian Affairs also serves as the prime U.S. government contact for 578 federally recognized tribes.

Haaland, who is a member of the Laguna Pueblo tribe west of Albuquerque, New Mexico, was just elected to her second term in the House.

As a Democrat in the chamber, Haaland has been an outspoken critic of fracking, the technique that drove U.S. oil and gas development to record levels, and she was an original cosponsor of the Green New Deal resolution outlining a vision for rapidly decarbonizing the U.S. economy. She also delivered food to Standing Rock Sioux protesters camped along the route of Energy Transfer’s Dakota Access oil pipeline in 2016 -- a move Haaland said was meant to show support for water protectors who believed they were insufficiently consulted on the project.

Haaland has downplayed those views during the confirmation process, asserting that fossil fuels will play a major role in the U.S. for years to come and emphasizing that Biden’s policy views, not her own, would take precedence at the Interior Department.

“The role of a congresswoman in one district in the country is much different than the role of a secretary who is fighting and working for every single American in all of our public lands across the country,” Haaland told senators in her confirmation hearing last month.

Even without Haaland’s confirmation, the Interior Department already has made a sharp policy shift under Biden, who campaigned on promises to encourage clean energy and curtail fossil fuel development on public land. One week after taking office, Biden paused the sale of new oil and gas rights on federal lands and waters -- a moratorium designed to allow time for a searching review of the leasing programs.