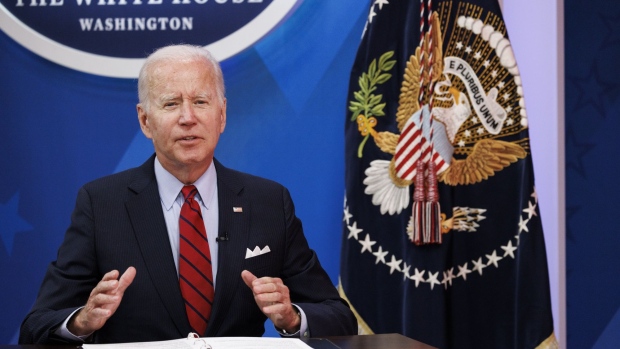 US President President Joe Biden speaks while meeting virtually with governors in the Eisenhower Executive Office Building in Washington, D.C., US, on Friday, July 1, 2022. Biden discussed his options for protecting women's access to abortion with the group of Democratic governors as he faces increasing pressure to respond more forcefully to the Supreme Court's ruling eliminating the constitutional right to the procedure. , Bloomberg

The possibility of nominating Meredith stunned progressives unhappy about the pace of Biden judicial nominations. Such a nomination in the wake of the Supreme Court’s decision overturning abortion rights could also undermine support for Democrats among women, who were vital in the 2020 election.

Even considering Meredith, who defended the state’s abortion restrictions, is “completely unacceptable,” Rakim Brooks, president of the progressive judicial advocacy group Alliance for Justice, said in a statement. “Democrats control the White House, Senate, and Congress and need to act accordingly.”

Meredith could be nominated to a seat held by Judge Karen Caldwell of the US District Court for the Eastern District of Kentucky, which includes Lexington and Frankfort. Caldwell notified the White House of her plans to take a form of semi-retirement known as senior status on June 22, according to the federal judiciary’s vacancy listings.

That listing appears to have been added Friday, two days after the Louisville Courier-Journal first reported Meredith’s potential nomination at a time when no vacancy had been publicly announced.

Yarmuth and Kentucky Gov. Andy Beshear (D) have decried the potential nomination. In an interview Friday, Yarmuth said Biden appears to be trying to strike a deal with Senate Minority Leader Mitch McConnell (R-Ky.) to stop him from holding up future federal nominations. He said McConnell has been pushing for Meredith for a while to get an appointment and is close to Caldwell personally.

Yarmuth said hopes the White House backs down after hearing his concerns, which also include Meredith’s involvement in controversial pardons by former Gov. Matt Bevin (R).

Beshear, at a Thursday news conference, slammed the lawyer’s work as legal counsel for Bevin. Beshear said the White House informed him last week of plans to nominate Meredith to the Eastern District.

“If the president makes that nomination, it is indefensible,” Beshear said. “This is an individual who aided and advised on the most egregious abuse of power by a governor in my lifetime.”

In response to an inquiry about the potential nomination, a White House official said the administration doesn’t comment on executive or judicial vacancies before a nominee is named as “a matter of practice.”

Meredith and a McConnell spokesman didn’t respond to requests for comment.

Although Democrats control the Senate, home-state senator support is needed for district court nominations to advance. Senators signify that support via a document known as a “blue slip.”

At the beginning of the Biden administration, Senate Democrats elected to continue the precedent Republicans set under Trump for blue slips, requiring home-state senator consent on district court nominations but not for circuit nominees. Rand Paul is Kentucky’s other Republican senator.

Senate Republicans did away with the blue slip requirement for circuit nominees during the Trump administration, and progressives have called for Democrats to similarly abandon the practice at the district level.

—with assistance from Alex Ebert