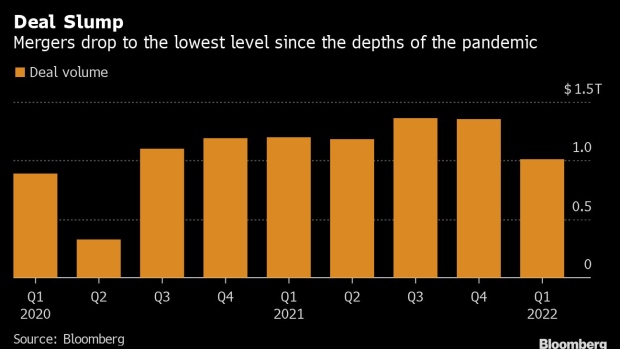 NEW YORK, NEW YORK - SEPTEMBER 29: A man looks out at the Manhattan skyline in a Brooklyn neighborhood on September 29, 2020 in New York City. New York City faces a severe financial crisis as unemployment has risen to 16% and thousands of wealthy residents who make up a vital tax base have fled the city. New York City lost 24,000 residents to Coved-19, more than any other city in America and one of the highest metropolitan losses in the world. Vital sectors like tourism, retail and cultural activities are still struggling as the city attempts to get past the epidemic. (Photo by Spencer Platt/Getty Images) , Photographer: Spencer Platt/Getty Images North America

(Bloomberg) -- Wall Street’s dealmaking boom came to an abrupt halt amid the war in Ukraine and a global shift toward rising interest rates, leaving big banks set to post a quarterly slump in investment-banking revenue.

The record merger-and-acquisition pipelines bank executives touted at the start of 2022 are still on the horizon, but have been put on the back burner amid gyrating markets and rampant inflation, according to Barclays Plc analyst Jason Goldberg.

“Many deals did not get launched given the market volatility throughout the quarter,” Goldberg said. “We do think pipelines remain strong and have just been more elongated than canceled.”

Another pressure point is the Biden administration’s more-skeptical view of mega mergers. U.S. antitrust enforcers earlier this year announced an effort to toughen merger reviews, saying a new framework is needed to combat a surge in deals that threatens to worsen already high concentration across industries.

M&A volume in the first quarter clocked in at $1.01 trillion, the lowest total since the early days of the pandemic, data compiled by Bloomberg show. Leadership at top banks cautioned when they reported fourth-quarter results that 2021’s deal wave wouldn’t last, even as investment bankers at JPMorgan Chase & Co. reported their best quarter ever.

JPMorgan is first among the top six banks scheduled to report, with results for the New York-based company set for Wednesday. That’s followed by an avalanche on Thursday: Citigroup Inc., Goldman Sachs Group Inc., Morgan Stanley and Wells Fargo & Co. all report that day. Bank of America Corp. comes next Monday.

Other key topics to watch in first-quarter earnings:

The same volatility clogging deal pipelines is hanging question marks over trading revenue at the banks. While projections suggest it will weaken along with investment banking, big swings in markets could mean banks will post better-than-expected results.

Volatility was particularly intense in prices for materials such as crude, gas, wheat and metals as a gulf emerged between buyers and sellers who are facing big financing strains. Markets were roiled as the invasion of Ukraine constrained commodities flows, though in many cases rallies were quickly followed by a drop in prices.

“This is the type of quarter that will make those banks that exited commodities do a double take,” said Mike Mayo, an analyst with Wells Fargo. “The big outstanding question is, How will the market’s volatility impact the results? There’s likely to be winners and losers.”

Capital markets will probably be another weak spot. Companies aggressively issued debt to boost liquidity during the pandemic and take advantage of low interest rates. Now they’re sitting on comfortable stockpiles of cash with little need to borrow anytime soon.

On the equities side, a slowdown in listings by special purpose acquisition companies is hampering results. Deals done by blank-check firms were a key source of equity-underwriting business last year, but have since fallen off. And the market is still digesting a plan from the U.S. Securities and Exchange Commission that would curb legal protections around forward-looking statements the entities currently enjoy.

Banks’ lending businesses suffered through historically low interest rates and weak demand amid government stimulus programs. But dwindling federal aid programs combined with higher interest rates could deliver the most substantive increase in loan growth since the start of the pandemic.

Projections from the top banks indicate lending could show a first-quarter gain of 9% from a year earlier, which would be the highest level since the first quarter of 2020.

Lenders are also boosting the rates they charge on loans, with the amount paid out on deposits rising at a slower pace. Banks are benefiting from the Federal Reserve’s shift to higher rates to combat spiraling inflation brought on by pandemic-era pressures and Russia’s invasion of Ukraine.