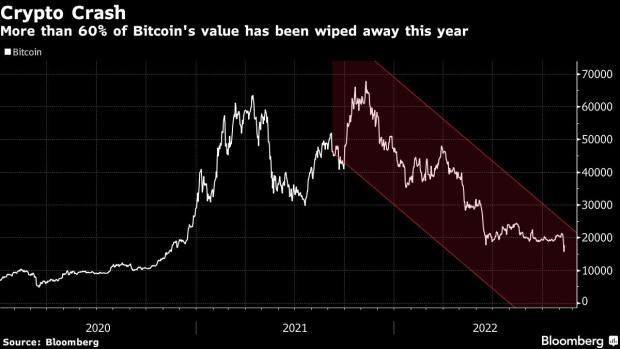 (Bloomberg) -- Institutional investors were souring on cryptocurrencies even before this week. The sudden downfall of Sam Bankman-Fried’s FTX.com may have permanently damaged their prospects of being included in mainstream portfolios.

While plenty of industry die-hards remain, many professional money managers are saying the case for crypto as a portfolio diversifier or digital gold has been debunked. The losses are too great and the market structure is too risky, they say.

“What’s become clear is it will not find a home in institutional asset allocation,” said Hani Redha, a multi-asset portfolio manager at Pinebridge Investments in London. “There was a period when it was being considered as a potential asset class that every investor should have in their strategic asset allocation and that’s off the table entirely.”

The implosions and scandals of the past few months have laid waste to the key arguments of crypto boosters, and all but obliterated the notion of Bitcoin as safe haven in turbulent times. But none of those events -- from the TerraUSD collapse to the Celsius bankruptcy -- were as damning as the revelation that even FTX, until recently considered one of the most blue-chip names in crypto, was unsound.

The FTX collapse is “raising questions on the viability of the crypto ecosystem,” said Salman Ahmed, chief investment strategist at Fidelity International, which oversees $646 billion from London. “It was always tough to make a case for including crypto, but the set up has come under more pressure.”

His firm launched an Bitcoin exchange-traded product in February, aimed at professional European investors. It has lost about 55% since inception.

Just a year ago, crypto mania was at its height and Bitcoin had topped $67,000. In January, Bridgewater estimated that 5% of Bitcoin was held by institutional-level investors.

Frothy predictions were everywhere back then. JPMorgan Chase & Co. strategist Nikolaos Panigirtzoglou wrote Bitcoin could theoretically reach $146,000 in the long-term by crowding out gold. A survey by PWC from April found that 42% of crypto hedge funds were predicting Bitcoin to trade between $75,000 and $100,000 by the end of 2022.

Now the views among investors are more restrained. Panigirtzoglou said in a report this week that Bitcoin could revisit the summer lows of $13,000. Bitcoin traded under $17,000 on Friday.

“The argument in investing in crypto as diversification died some time ago,” he said in an interview.

Bitcoin has crashed and recovered before. Some believers see hubris in the market is being flushed out, which will eventually put the industry on a path to maturity. FTX’s troubles may actually benefit established companies with a track record of risk management, like Nasdaq Stock Market and CBOE Global Markets Inc., wrote Mike Cyprys, an analyst at Morgan Stanley.

However to Mark Dowding, the chief investment officer at BlueBay Asset Management, the case for Bitcoin becoming a version of digital gold is bogus. It’s only a matter of time until even more investors bail and crypto prices plunge again, he said.

“It should have been clear that an industry that has been producing nothing, burning cash and offering alluring returns, was destined to fail,” he said.