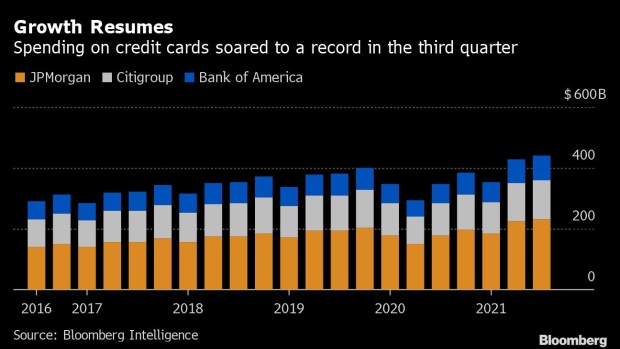 (Bloomberg) -- Big credit-card spenders are back. The problem for the top U.S. banks is they’re paying off their bills every month.

The nation’s largest lenders this week each reported a surge in spending on their plastic during the three months through September: JPMorgan Chase & Co., Citigroup Inc. and Bank of America Corp. said combined spending soared 27% to a record $441 billion. But customers have been slower to get back to borrowing.

That’s because the government pumped an unprecedented amount of stimulus into the U.S. economy in response to the Covid-19 crisis, leaving consumers and businesses flush with cash. Total card loans across the three biggest U.S. banks dipped 0.1% to $345 billion in the three months through September.

“You’re seeing purchase sales are up but payment rates are still quite high,” Citigroup Inc. Chief Financial Officer Mark Mason said on a conference call this week, after the New York-based bank reported third-quarter results. “We’ve got to see how stimulus and liquidity plays out over time.”

The pickup in spending is a stark turnaround from a year ago, when consumers were stymied by nationwide lockdowns and stay-at-home orders. This week, banks said Americans are getting back on the road and even heading to concerts again.

“We continued to see spending shift toward travel and in-person entertainment as well as fuel, driven by both increased use and higher fuel prices,” Bank of America Corp. Chief Executive Officer Brian Moynihan told analysts on a conference call Thursday. “And that’s another economic signpost to the steady recovery.”

Banks spent much of last year setting aside billions in reserves as unemployment soared, sparking fears of widespread defaults. That meant they also paused much of their card marketing and largely held off on trying to attract new customers.

That’s changing. JPMorgan Chase & Co. recorded about $350 million in costs tied to card-account acquisitions, according to analysts at Morgan Stanley. Bank of America churned out 1 million new cards in the third quarter, the same level as before the pandemic, as it started up its marketing engine again.

“We’re in the market right now competing aggressively with some great offers, and I’m happy to say, actually, the client acquisition in card is going great,” said Jeremy Barnum, chief financial officer at JPMorgan, which in recent months debuted a 100,000-point sign-up bonus for new customers of its Sapphire Preferred card. “We’re seeing great uptake on the offers, but that comes with a bit of elevated marketing expense.”

That slump may have gone too far, according to Betsy Graseck, an analyst at Morgan Stanley.

“We think the market is overreacting,” Graseck said in a note to clients. “The market is also spooked because JPMorgan indicated that this higher charge will go on for several more quarters. The market seems to be thinking that the reward competition is going to continue ramping aggressively.”

With loan growth remaining elusive, many banks touted their efforts to better compete with a bevy of buy-now-pay-later providers, which allow consumers to split up large purchases and pay them off over time. Citigroup, for instance, said installment loans, including those tied to its credit-card offerings, jumped 22% in the quarter from the same period a year earlier.

Consumers are expected to spend a whopping $100 billion using buy-now-pay-later providers such as Afterpay and Klarna, according to Cornerstone Advisors. Their recent popularity has banks rushing to compete: Wells Fargo & Co., in one example, is planning to push into the business in some way, Chief Executive Officer Charlie Scharf said.

“We’ve got a significant number of merchant relationships ourselves,” Scharf said on his company’s earnings conference call Thursday. “So it’s a place that we will be in addition to the products that we have.”