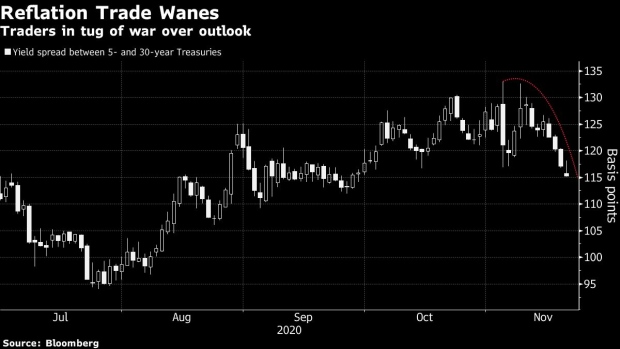 The Federal Reserve building in Washington, D.C., U.S., on Monday, Nov. 9, 2020. Few Republican officeholders have been willing to publicly dispute President Donald Trump as he attacks the integrity of the election system, underscoring how he will remain a potent force in GOP politics even if he ultimately loses the White House. Photographer: Stefani Reynolds/Bloomberg , Bloomberg

(Bloomberg) -- The tide in the $20 trillion Treasury market appears to be turning in favor of the bulls for now, with expectations growing that the Federal Reserve will boost purchases of longer-maturity debt as soon as next month.

U.S. government debt just logged its best week since August after the Treasury demanded the Fed return unused funds from emergency lending programs, a request the central bank said late Friday it would comply with. The development bolstered Wall Street predictions that the Fed will unveil more monetary action when it meets in mid-December.

Strategists are coalescing around the Fed tilting its $80 billion of monthly Treasury purchases more toward longer-term obligations in a bid to buoy the economy as coronavirus cases surge and as fiscal-stimulus talks have stalled out. That backdrop is helping cap long-term rates, in a blow to the reflation trade in bonds -- namely, bets on a steeper yield curve, which have struggled even after positive vaccine news.

“There’s a big war going on in bonds,” said Jack McIntyre, who helps oversee about $62 billion at Brandywine Global Investment Management. “With the vaccine news bonds should be selling off, but that hasn’t held. The market’s expectations for Fed action is what is keeping bonds from selling off.”

Longer maturities were last week’s best performers. The yield curve from 5 to 30 years, which on Nov. 4 reached its steepest level since 2016, has flattened to levels last seen in September.

The momentum toward flattening picked up Friday as traders prepared for a holiday-shortened week and a total of nearly $200 billion of 2-, 5- and 7-year auctions, including floating-rate notes, crammed into Monday and Tuesday. Meanwhile, an above-average month-end index extension may add impetus for the long-end to outperform through the end of November.

Benchmark 10-year yields are at 0.82%, after looking like they were about to break the key 1% mark for the first time since March in the wake of the U.S. election. And net bearish wagers in bond futures by so-called leveraged accounts have declined from a record level seen in October.

JPMorgan Chase & Co. is among firms predicting the Fed will use its Dec. 15-16 meeting to extend the maturity of its purchases of U.S. Treasuries to create more of a catalyst to reduce longer-term yields. The Fed currently buys Treasuries across a range of maturities without a skew toward one sector.

Andrew Hunter, an economist at Capital Economics, wrote in a note Friday that Treasury’s action regarding emergency programs shouldn’t have a major impact on the economy. But he said it still could raise the likelihood that the Fed provides more stimulus, most likely by increasing the pace of its monthly asset purchases.

Treasury Secretary Steven Mnuchin on Friday said his agency and the Fed have enough fire-power to continue to support the economy. He’s bidding to revive stimulus talks with congressional Democrats by proposing the use of untapped Fed relief funds as part of a new aid package.

The tug of war in Treasuries, which are up about 8% in 2020, according to a Bloomberg Barclays index, is likely to extend through year-end, even if the intensifying pandemic appears to be swaying investors right now.

A flurry of options trades has emerged betting the 10-year yield will fall to 0.7% by late December. But many firms are looking beyond the short-term economic headwinds to see a brighter 2021 that pushes up long-term yields. Charles Schwab & Co.’s Kathy Jones sees potential for the 10-year to reach 1.6% next year.

“People are nervous about the virus with a lot of states imposing partial lockdowns and school closings,” said Elaine Kan, a portfolio manager at Loomis Sayles & Co. “So yields are probably going to be rangy and the more we have negative headline news, the flatter the curve will be.”