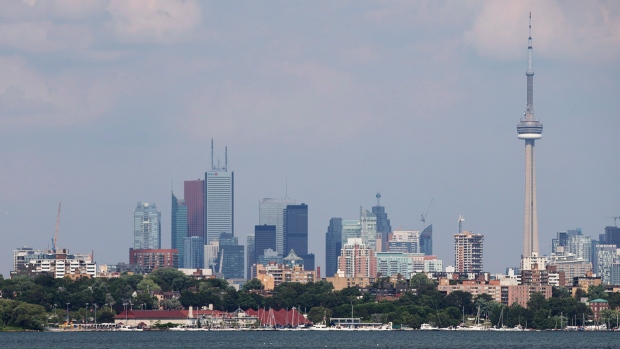 First Gulf Development Corp. is considering everything from an initial public offering to bond financing to get Canada’s biggest office project off the ground -- 12 million square feet of space in Toronto that will hold more than 50,000 workers and cost about $8 billion to build.

The company expects to get planning approval by June to start development on the 60 acre (24-hectare) site known as East Harbour, which the city officially pitched for Amazon’s HQ2. The project, located east of the financial core and next to the smart city proposed by Google parent Alphabet Inc., will include a mix of office, retail and institutional space.

“The scale of this is not something that we have seen in Canada,” said Derek Goring, vice president of development of Toronto-based First Gulf, adding that the raising of capital is still some way off. “Banks are cautious and they often have project limits, so you’d have a syndication of banks you’d need to pull together to get the financing required on a scale that we haven’t really dealt with before.”

East Harbour would be the biggest project yet for First Gulf, which owns about $4 billion in developed assets and is the commercial arm of closely held Great Gulf Homes Ltd., one of North America’s largest home builders. The development comes amid a commercial-property boom in Canada. Sales reached a record $43 billion last year, driven by a buoyant economy and foreign demand, according to a report Wednesday from CBRE Group Inc.

Yet vast tracts of land along Toronto’s eastern waterfront remain undeveloped. After buying the former Unilever soap-factory site in 2012, First Gulf has been adding land and working to get zoning approval. It currently has 38 acres, with the rest largely owned by the city. The “key to unlocking this project” hinges on the city approving a transit station for the site, Goring said in an interview at Bloomberg’s Toronto offices.

The transit hub will link the suburbs and local stops to downtown Toronto. While the station has been approved with a target date for completion in 2023, the city will need to reconfirm funding for all proposed stations including East Harbour in April, according to Goring.

“April’s this really important milestone, because the request for qualifications to actually build the station is going to go out in the spring,” he said.

If all goes well, First Gulf will kick off the first phase by converting the soap factory into office space, which will probably cost about $200 million to $300 million, Goring said. The building has an industrial grittiness to it that will likely appeal to technology firms, he said. The company has marketed the building “informally” but will start to do so proactively this year.

“We can’t really be that picky,” he said, given the company wants to fill 10 million square feet of office space over the 15-to-20-year life of project.

First Gulf plans to recycle equity as it builds different phases, Goring said. “Our ability to do that depends on how much equity we get. It would be a good idea to have four or five office buildings under construction at the same time.”

Given the size of the site, tenants can request designs to fit their needs. This certainly applies to Amazon if Jeff Bezos decides to move his 8-million-square-foot HQ2 to East Harbour, though Goring isn’t holding his breath.

“We’re not changing anything that we’re doing as a result of the Amazon bid, so if it happens, then it simply accelerates a project that the city wanted and that we wanted to do anyway,” he said. And even if it’s unlikely Amazon will move its new headquarters outside of the U.S., that doesn’t mean they won’t need new space amid the e-commerce boom, he said.