One of Canada’s most prominent venture capitalists is calling on Canada to emphasize its healthcare bonafides in a bid to secure Amazon’s HQ2. In an interview on BNN, Clearbanc co-founder Michele Romanow said Toronto should strike while the iron is hot after Amazon Chief Executive Officer Jeff Bezos made employee healthcare a priority by partnering with Berkshire’s Warren Buffett and JPMorgan’s Jamie Dimon on a new healthcare company.

“It’s an interesting twist in the story, and it’s one that certainly gives Canada an advantage that frankly, no other American city could go after,” Romanow said. “Employees today care more about their health – now health is not just about when you get sick, it’s the entire wellness component of hoping we can help people not get sick along the way – and I think Canada should, and can, be playing that up more.”

Canada’s universal healthcare system was repeatedly mentioned in Toronto’s pitch to the online retailing giant late last year. Global Toronto, which is spearheading the bid, said Amazon stands to save US$600 million per year in healthcare and benefit costs by locating the new facility and its planned 50,000 employees in the Great White North.

In the bid materials, Global Toronto said the average U.S. employer paid out about 37 per cent of its payroll cost to healthcare and benefits, compared to 25 per cent for Canadian firms.

Romanow echoed that sentiment, pointing to the savings she’s found by keeping her ventures in Canada, which became more important as she grew her workforce.

“As an entrepreneur here, it’s a tremendous advantage that the healthcare costs that I pay are a fraction of what the Americans pay, that I don’t have that level of burden,” she said. “That burden changes substantially when you move from startup with often young, early employees to large company where you have people spread across the spectrum, and many different healthcare needs.”

While the benefits of universal healthcare were brought up repeatedly in Toronto’s pitch, Romanow said Toronto should seize on Bezos’ announcement and make sure the message gets through loud and clear.

“I think it should be a strong part of Canada’s bid, and certainly Toronto’s, and I think it’s probably the time to bring that up, because it is the topic of the hour.” 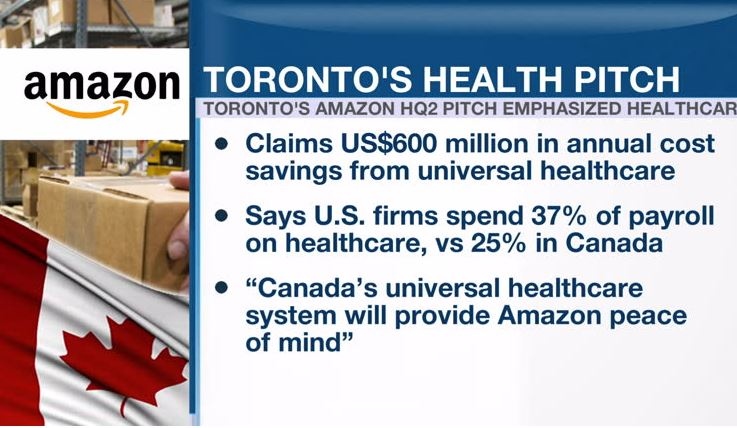