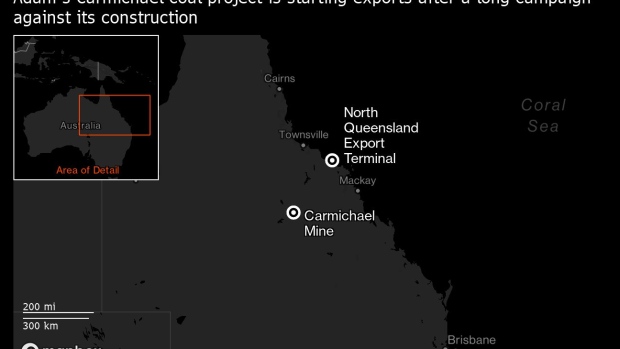 (Bloomberg) -- Billionaire Gautam Adani’s coal mine in Australia, a project that’s become a global emblem for opposition to fossil fuels, is preparing to begin exports after more than a decade of bitter dispute over its development.

Proposed in 2010 and stalled by legal challenges, financing setbacks and a sustained campaign from climate activists, the operation is scheduled to ship first cargoes before the end of December and aims to supply an initial 10 million tons of thermal coal annually for at least 30 years.

Opposition to the Carmichael mine, located inland from Australia’s iconic Great Barrier Reef in Queensland state, has spanned environmental activists to Wall Street banks, insurers and investors, offering a microcosm of the escalating international campaign against the most polluting fossil fuel in the past decade.

“Carmichael seems to have catalyzed a broader conversation about the future of thermal coal,” said Samantha Hepburn, a law professor at Melbourne-based Deakin University who has focused on mining and energy issues. “That’s happening not just for activists, but in boardrooms and for investors across the world who want to reduce their exposure to toxic investments.”

Yet the start of overseas sales also reflects coal’s still-pivotal role in the world’s energy mix, a status that led China and India — the top consumers — to dilute efforts to set a global deadline to phase out the fuel at the COP26 climate talks. Demand is rising in parts of Asia, and the remedy from Beijing and New Delhi to recent power shortages was to ramp up coal production.

Exports from Carmichael will be used to supply electricity to India and nations in Southeast Asia, according to Bravus Mining & Resources, an Adani unit in Australia. Analysts expect at least some of the material to be used by the conglomerate’s own power plants, though the company declined to specify details of its customers.

“We have already secured the market for the 10 million tons per annum of coal,” Bravus said in a statement, confirming its export plans are on track. “The coal will be sold at index adjusted pricing,” and all taxes and royalties will be paid locally, according to the company. Seaborne coal prices have swung wildly in recent weeks, plunging from a record high in October and then recovering some of the gains.

The project, which the company self-financed, has been scaled back from initial plans for a A$16 billion ($11 billion) operation that could yield 60 million tons a year.  The company also lists more than 100 approvals secured for the development, and has developed conservation strategies including plans to protect the endangered black-throated finch, found in the project area

Australia’s government also argues that local mines like Carmichael could reduce global emissions, as the coal is higher quality and will displace the use of more polluting fuel.

Adani, Asia’s second richest man and the founder of the Adani Group, is facing sharp criticism as his companies seek to add investments in fossil fuels — including coal mines and power plants — even as he heralds a $70 billion campaign to build a world-leading renewable energy giant.

“We are doing all we can to make renewables a viable, affordable alternative to fossil fuels,” Adani told the Bloomberg India Economic Forum last month, lending support to Prime Minister Narendra Modi’s goal for the world’s third-biggest polluter to zero out emissions by 2070.

Ending India’s reliance on coal, which accounts for about 70% of electricity generation, is pivotal to that target, and Adani’s opponents point to proposals that could almost double the group’s coal-fired power capacity, and dramatically boost production of the fuel.

“Adani is trying to walk both sides of the street,” said Tim Buckley, director of energy finance studies at the Institute for Energy Economics and Financial Analysis.

The Carmichael project has commanded such wide attention over its initial planned scale, which could’ve created Australia’s largest coal mine, the fact it’ll boost global supply just as nations including the U.S. urge consumers to rapidly phase out the fuel’s use, and over opposition from some Indigenous landowners.

There have also been enduring concerns that the development, which includes a 200-kilometer (124 mile) railroad, could help enable a series of mines in Queensland’s previously untouched Galilee Basin, a coal-rich region about the same size as the U.K.

Though other proposals have made little recent progress, the Galilee Basin could potentially produce as much as 200 million tons a year — about the same as Australia’s existing thermal coal exports. Campaigners describe the prospect of new mines producing those volumes as “an unconscionable carbon bomb.”

The project has even impacted Australia’s politics. A defense of coal jobs by Prime Minister Scott Morrison’s governing coalition allowed it to hold support in Queensland’s mining strongholds in a 2019 national election and retain office. Morrison’s government is now facing criticism over a plan for net zero emissions which predicts coal and gas exports — forecast to deliver earnings of about A$110 billion this fiscal year — can continue beyond 2050.

Debate over the operation has been global. Paris-based Amundi SA sold holdings of State Bank of India’s green bonds because of the institution’s exposure to the mine, and Bank of New York Mellon Corp. said last month it would sever ties with Carmichael. Siemens AG faced street protests in Munich, and was scolded by both BlackRock Inc. and Fridays for Future activists, including Greta Thunberg, over a contract to supply rail signaling equipment for the project.

Lenders including Industrial & Commercial Bank of China Ltd. and Investec Plc specifically ruled out financing the mine, while banks like Goldman Sachs Group Inc. effectively excluded themselves by setting tighter policies on coal.

As Adani makes final preparations to ship initial cargoes, it’s facing new attempted disruptions. In recent days, protesters clambered aboard coal-laden wagons and laid themselves across a railroad that connects Carmichael to an export terminal. Authorities are failing to ensure there are sufficient deterrents to prevent unsafe protests that put lives at risk, Adani’s Abbot Point Operations unit said in a statement.