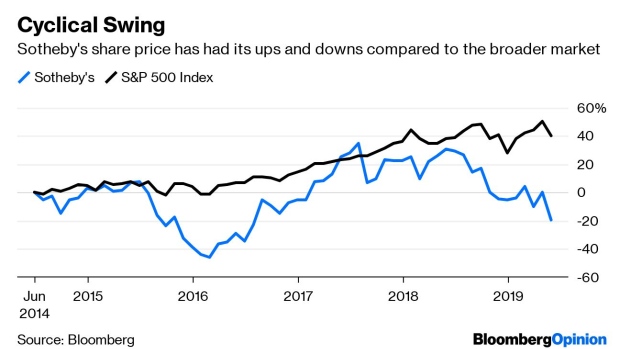 (Bloomberg Opinion) -- For full tycoon status, you need to own a real trophy asset. Patrick Drahi has moved to obtain lasting renown by securing a $3.7 billion deal to buy the venerable auction house Sotheby’s. Getting noticed doesn’t come cheap.

Drahi is best known as the acquisitive founder of Altice Europe NV, a Dutch-listed telecoms group, and its sister business Altice USA Inc. He’s No. 174 in the Bloomberg Billionaires index, with an estimated net worth of $8.6 billion, just above his mentor, Liberty Global Plc’s John Malone. He can afford Sotheby’s. But expect him to be using a heap of debt to do so, something straight out of his and Malone’s playbooks.

You never get a trophy for a bargain fee and so it is here. Drahi is offering a 61% premium to the Sotheby’s closing price on Friday, and a 56% premium to the 30-day average price. On a longer-term view, the auction house is slightly better value. The $57-a-share bid is still 3% below the company’s year high, and is 21 times expected earnings over the next 12 months. The stock was trading at 23 times earnings back in September. The market isn’t expecting a counterbid. But there’s only one Sotheby’s and it can’t be ruled out.

For Sotheby’s, it’s hard to see how an offer with this premium, and from an art lover, could have been rejected. Indeed, the company is voicing the now familiar lament that private ownership may suit the business better. It’s certainly been tough for the board on the public markets. Shareholder activist assaults have included a 2014 whipping from Dan Loeb’s Third Point LLC, a 14% shareholder, who complained about poor governance and weak cost control.

For Drahi the commercial attractions are less clear cut. He’s paying a handsome premium that only he can justify. Running auctions is a tricky business: The market is highly volatile, clients may demand guaranteed minimum prices to choose a particular auction house, and there are lots of expensive staff on the books. The economics are similar to owning a blue chip investment bank, even if the social cachet is on another level (arch-rival Christie’s is owned by the Pinaults, no strangers to trophy assets).

Still, with the numbers of the world’s super-wealthy expanding, art prices tend to do the same thing. The issue for the auction houses is making sure they get the very top contemporary pieces, so popular with Drahi’s billionaire cohort.

What does Drahi bring other than his commitment to the arts and experience as a Sotheby’s client? It would be brave to bet against him, but his undoubted skills in financial structuring don’t seem particularly relevant in this case. Possibly his experience of cutting costs and transforming businesses will be of benefit, in particular as Sotheby’s adapts to digital sales.

It’s not obvious why full ownership of Sotheby's would be the first recommendation of an adviser to Drahi’s family office. It’s a risky business. There may be wiser uses of $4 billion – just not ones that put you on the cultural map.

To contact the author of this story: Chris Hughes at chughes89@bloomberg.net