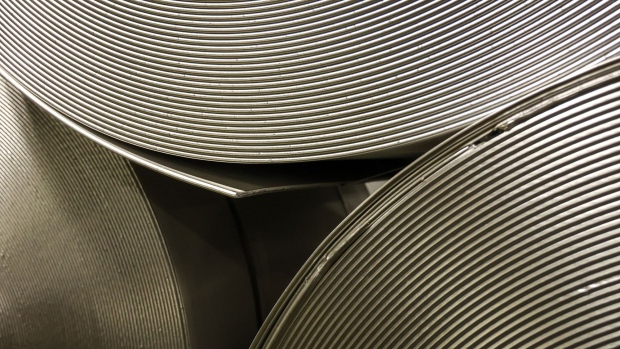 (Bloomberg) -- Hindalco Industries Ltd.’s quarterly profit jumped by almost half from a year earlier, underpinned by strong US sales and higher revenue that cushioned the impact of pricier raw materials.

Group net income at the aluminum and copper producer rose to a record 41.2 billion rupees ($518 million) in the three months through June, up 48% from the same quarter last year. That beat analysts’ estimates for a profit of 28.5 billion rupees. Sales climbed 40% from a year earlier to 580.2 billion rupees.

The performance of Hindalco, controlled by billionaire Kumar Mangalam Birla, was aided by aluminum prices that, while falling over the period, were higher than last year. Global supply chain problems persist, including lower output in Europe, where mills are grappling with soaring energy costs.

Hindalco’s US unit Novelis Inc. reported a 32% year-on-year increase in sales and $307 million in net income from continuing operations, it reported last week. The company saw record shipments in North America on strong demand from can manufactures and the automotive sector, although the favorable pricing environment was partly offset by inflationary pressures.

Aluminum consumption in India rose 11% in April-June from a year earlier, led by improved demand from sectors like packaging, automotive, building & construction, consumer durables, and electrical, Hindalco said. Copper demand grew by about 47%, it said.

The company’s net debt fell 19% from a year earlier to 421.93 billion rupees at the end of June, it said in the earnings presentation.

Hindalco’s shares rose as much as 5.5% in Mumbai on Wednesday, and were set for the highest close in three months. There are 23 buy recommendations from analysts on the company, and only one sell, according to data compiled by Bloomberg.