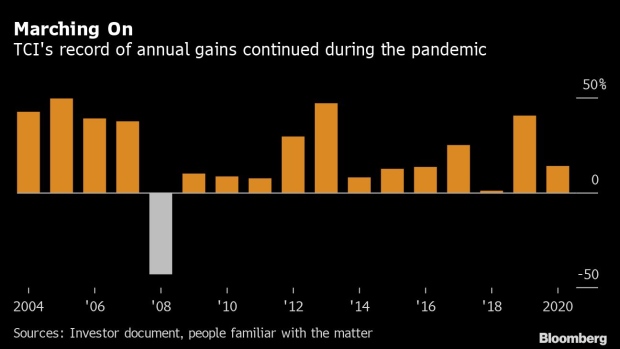 (Bloomberg) -- Billionaire activist investor Christopher Hohn’s hedge fund has racked up a 12th straight year of gains, overcoming record losses at the onset of the pandemic.

The Children’s Investment Fund made about 14% in 2020 as its concentrated stock portfolio rose amid surging markets, according to people with knowledge of the details. That took the fund’s assets to about $35 billion, a separate person said, asking not to be identified because the information is private.

Hohn hasn’t lost money in a year since the last financial crisis. Last year, the fund recovered from losing 19% in March, the most in a month since it started trading in 2004, as the coronavirus roiled global markets.

Bets on firms such as Microsoft Corp., Canadian Pacific Railway Ltd. and Charter Communications Inc. contributed to the fund’s 2020 gains. Still, while Hohn outperformed activist hedge funds that were up an average 6.2% through November, he fell short of the 18.4% gain in the S&P 500 Index.

A spokesman for the London-based investment firm, which manages about $45 billion, declined to comment on the returns.

Hohn is famous for building large stakes in companies and pushing for change to boost their share prices. He runs a long-biased portfolio spread over a small number of stocks, making it susceptible to sharp drops in values. The strategy has worked for his investors over the years, with the fund losing money only in 2008 when it dropped 43%.

Hohn started TCI in 2004 after earning a reputation as a gifted stock picker in the London office of Perry Capital, a New York-based hedge fund. His bets have included companies such as ABN Amro Bank NV, News Corp. and recently some attempted agitation against the London Stock Exchange Group Plc.