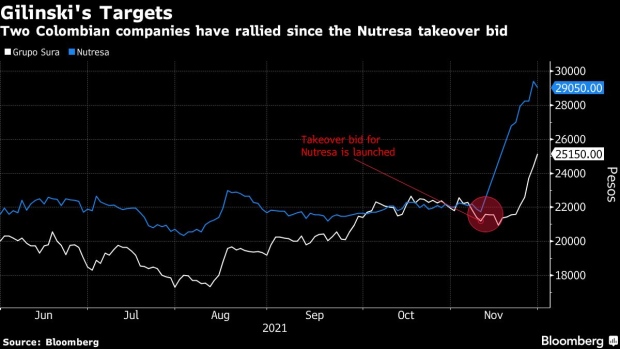 (Bloomberg) -- Banking billionaire Jaime Gilinski launched an offer to take a substantial stake in the financial conglomerate Grupo Sura Tuesday, just weeks after making a bid to take over a Colombian foodmaker.

Gilinski and his son, Gabriel, are behind the offer of $8.01 per share for as much as 31.68% of Grupo de Inversiones Suramericana, according to a person with direct knowledge of the offer. The offer, which represents a premium of more than 27% from Tuesday’s closing price, will go to shareholders after regulatory approval and could close by late this year or early January, the person said.

Gilinski, 63, teamed with the royal family of Abu Dhabi this month in an attempt to take over food producer Grupo Nutresa SA in a deal that could be worth as much as $2.2 billion. The royal family is not a partner in the offer for Sura, the person said. JGDB Holding SAS presented a guarantee for the bid, according to a stock exchange filing.

Sura, Nutresa and other Medellin-based companies make up the Grupo Empresarial Antioqueno, a business association that employs a system of cross investments to fend off takeover bids. If Gilinski is successful in taking over Nutresa, he will have control of the 13% stake the company owns in Grupo Sura. Sura, in turn, owns a 35% stake in Nutresa.

Sura owns an insurer and an asset management company and has a 46% stake in Bancolombia SA, Colombia’s largest bank. Its shares have risen 18% since Gilinski launched his takeover bid for Nutresa.

Gilinski, who had made the bulk of his fortune in the finance and private equity industries, is worth about $4.3 billion, according to the Bloomberg Billionaires Index, making him one of Colombia’s richest people.