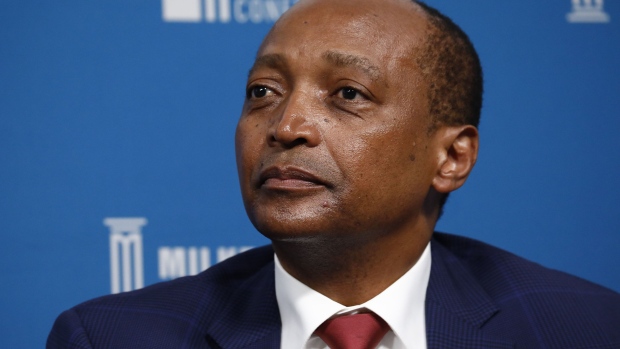 Patrice Motsepe, founder and chairman of African Rainbow Minerals Ltd., listens during the Milken Institute Global Conference in Beverly Hills, California, U.S., on Tuesday, April 30, 2019. The conference brings together leaders in business, government, technology, philanthropy, academia, and the media to discuss actionable and collaborative solutions to some of the most important questions of our time. , Bloomberg

(Bloomberg) -- African Rainbow Capital Investments Ltd. is planning to expand its portfolio and has entered negotiations to add a fintech conglomerate to the group.

It has now set aside as much as 350 million rand ($25 million) for its new investment, co-Chief Executive Officer Johan van der Merwe said in an interview.

The fintech conglomerate includes “one or two advanced businesses and there are a few startups,” he said. “It’s still in negotiations.”

ARC is also in talks to attract new investors for TymeBank, which launched in 2019 and is expected to break even next year, Van der Merwe said.

The bank recently acquired a license to launch operations in the Philippines and is exploring other Asian markets after JG Summit Holdings, one of the largest conglomerates in the country, invested in the business.