Chinese billionaire Wang Zhenhua was detained by Shanghai police, triggering an exodus from shares and bonds of his Hong Kong-listed property developer.

Wang, the 57-year-old founder of Future Land Development Holdings Ltd., is being held in criminal custody by the Putuo branch of the Shanghai Public Security Bureau for “personal reasons,” the company said in an exchange filing late Wednesday without elaborating. He will be replaced as company chairman by his son, according to the filing.

Police in Putuo said in a social media post on Wednesday that they were holding two individuals for suspected molestation of a minor. They identified one of the suspects as a 57-year-old with the surname Wang, from the province of Jiangsu, north of Shanghai. The police didn’t provide further details on the suspects’ identities. 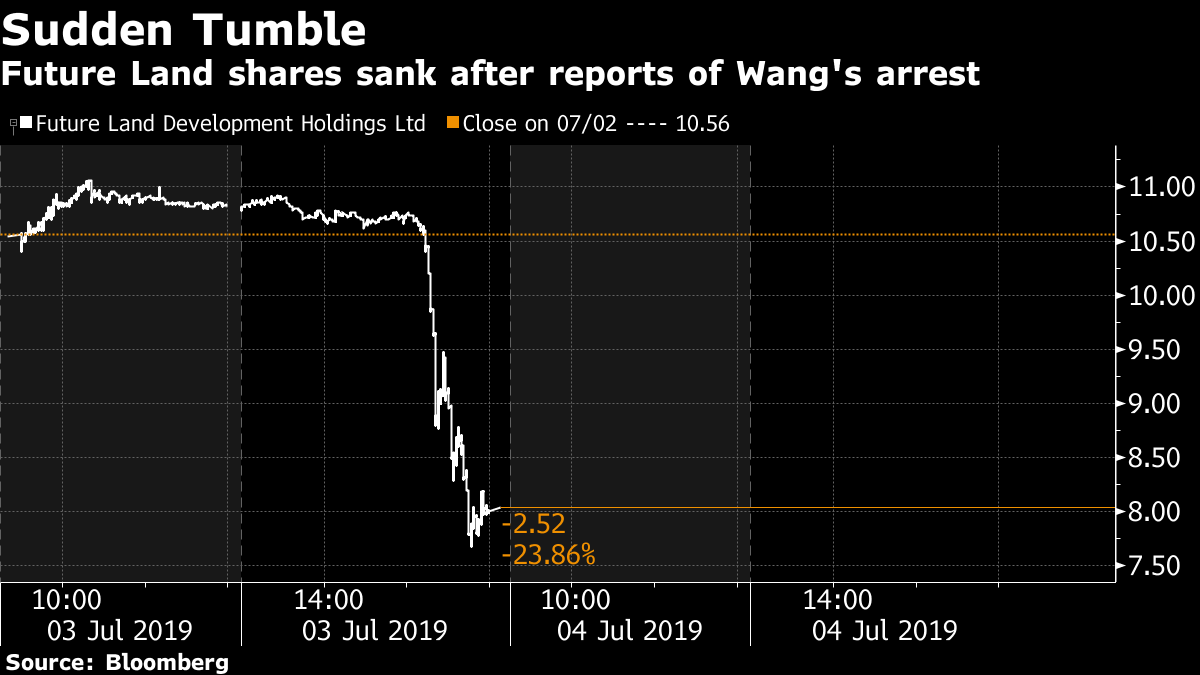 Media reports of Wang’s detention spurred a record drop in Future Land shares on Wednesday and sent the company’s dollar bond due 2023 tumbling by the most since the security was sold in April. The company, which has a market value of about $5.2 billion, is a constituent of MSCI Inc.’s global indexes. It fell another 15 per cent in pre-market trading on Thursday.

Wang owns about 70 per cent of Future Land, which is active in China’s Yangtze River Delta region. The Shanghai-based company, which owns more than 100 shopping malls in China, reported revenue of 54.8 billion yuan (US$8 billion) in 2018. Wang also has a majority stake in property-management company S-Enjoy Service Group Co., which recently changed its name from Xinchengyue Holdings Ltd. He had a net worth of $6.6 billion as of Tuesday, according to the Bloomberg Billionaires Index.

That fortune took a US$1.6 billion hit Wednesday as shares of Future Land and S-Enjoy tumbled.

“The potential loss of the chairman may have a significant impact on the company,” said Charles Macgregor, Singapore-based head of Asia at Lucror Analytics Pte. If Wang can’t resume his duties, Future Land may face takeover attempts from rivals, Macgregor said.