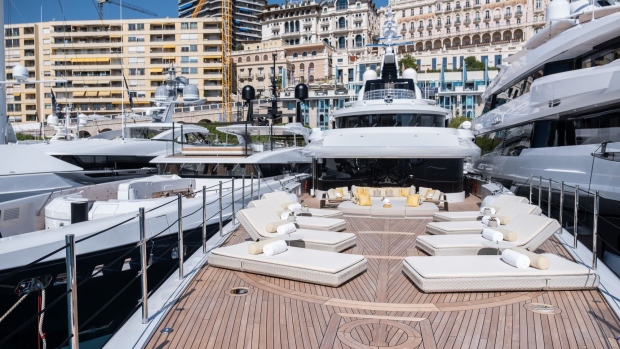 David Geffen’s picture-perfect self-seclusion is highlighting ugly divisions in the age of the coronavirus pandemic.

“Isolated in the Grenadines avoiding the virus,” the billionaire, 77, said in an Instagram post. “I’m hoping everybody is staying safe.”

The photos of his luxury confinement aboard the 454-foot Rising Sun, one of the world’s biggest private vessels, triggered an immediate social-media backlash over the weekend.

“This is just shameful and grotesque,” Meghan McCain tweeted Saturday, one of thousands of critical comments.

Thanks, David Geffen, for your thoughts. pic.twitter.com/5XTRhGX5OP

Geffen’s Caribbean excursion is the latest revelation of how the crisis is affecting people unequally across the globe. While the world’s wealthy have fled to vacation homes, specially made bunkers or floating palaces, rank-and-file workers from nurses to supermarket cashiers have been left juggling childcare and risking infection working jobs deemed essential.

The Rising Sun has been in the Caribbean since mid-November and has sailed back and forth between Grenada, St. Vincent and the Grenadines since February. Built for Oracle Corp. founder Larry Ellison, the yacht comes with a gym, cinema and wine cellar. It’s not the only billionaire’s boat in the Caribbean, with Roman Abramovich’s Eclipse and Ernesto Bertarelli’s Vava II also dropping anchor in the region.

Geffen, who has a net worth of US$9 billion according to the Bloomberg Billionaires Index, didn’t respond to a request for comment.

While the ship may seem like a floating haven, there’s the risk of a guest or crew member becoming ill. The getaway could “quickly turn into a quarantine nightmare,” according to industry publication Superyacht Times.

That has already been demonstrated by cruise-line companies, some of whose ships have been denied entry to ports after virus outbreaks among passenger and crew.

Those fears have also affected the superyacht industry, which employs more than 160,000 people worldwide. Geffen is an exception in an environment where few of the world’s rich are willing to spend huge sums on buying or renting extravagant vessels during the pandemic and market rout.

“Our market has basically come to a standstill overnight,” said Jonathan Beckett, chief executive officer of yacht broker Burgess. “It’s a matter of sitting it out and being able to afford to sit out.”

Many Caribbean islands “have shut down,” said Raphael Sauleau, CEO of yacht broker Fraser. “We had a charter that was supposed to disembark in one place but couldn’t.”

The yacht season in the Mediterranean is struggling before it even starts. The Monaco Grand Prix in May has been canceled, and regular attendees to the principality’s yacht show in September are hesitant about making financial commitments while many of the super-rich are in isolation.

“We would sign a contract, but we’re not going to be paying non-refundable deposits -- that’s for sure,” Beckett said. The pandemic “is going to have a big impact on our industry this year. You’ve got to ride out the storm and do the very best you can.”