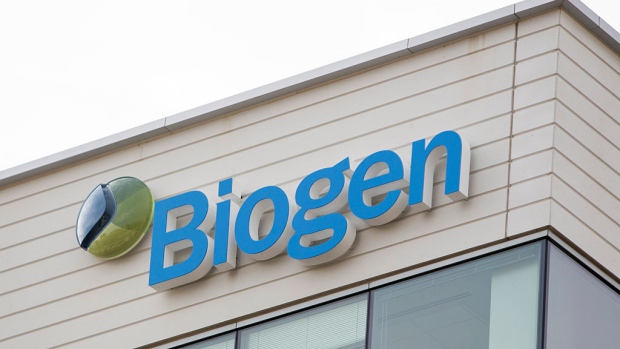 Signage is displayed outside of the Biogen Inc. headquarters in Cambridge, Massachusetts, U.S., on Wednesday, Oct. 21, 2015. Biogen Inc. will fire 11 percent of its workforce and shut down some research programs in order to put money behind existing drugs and what it sees as its best future bets. , Photographer: Bloomberg/Bloomberg

Biogen Inc. shed more than US$3 billion in market value in the past two trading sessions as a patent review of its top drug Tecfidera Wednesday raised concerns over a potential generic threat from Mylan NV.

Shares fell as much as 3.7 per cent on Thursday, the most in two months, extending losses for a third day. Analysts held different views on the trial, with Evercore ISI Umer Raffat saying the hearing went better-than-expected for Biogen, while RBC analyst Brian Abrahams said Mylan seemed to make “a slightly stronger case.”

“In totality, the arguments and judges’ reactions seemed to favor MYL incrementally,” he wrote to clients, assigning a 60-per-cent probability of success for the company.

On Wednesday, the U.S. Patent and Trial Appeal Board heard arguments under a process called inter partes review on Mylan’s challenge of Biogen patent 8,399,514. The generic drugmaker contends that the active ingredient in Tecfidera, dimethyl fumarate, had been known for years and the dosage form was predictable.

The stakes are high for Cambridge, Massachusetts-based Biogen. The multiple sclerosis drug is its top-selling medicine, generating US$1.1 billion in sales just last quarter. The patent is critical in extending the medicine’s exclusivity into the next decade as it’s set to expire in 2028. All the other Tecfidera patents listed on the FDA’s registry of information expire by June 2020.

--With assistance from Susan Decker.