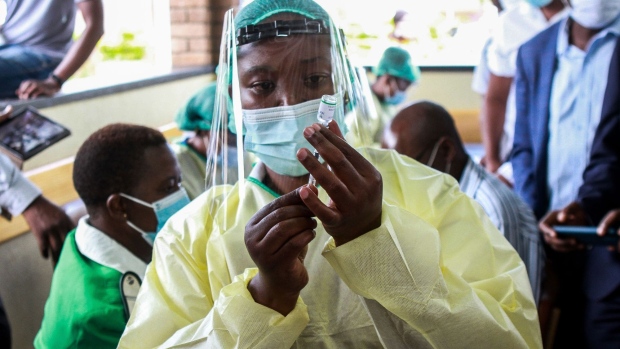 HARARE, ZIMBABWE - FEBRUARY 18: A health worker draws out the Sinopharm vaccine from a tube at Wilkins Infectious Diseases Hospital on February 18, 2021 in Harare, Zimbabwe. Zimbabwe will begin vaccinating against Covid-19 on Thursday, starting with health workers and other essential service personnel. Health professionals and immigration agents working at border posts will get first priority for the jabs, according to a government roll-out plan. (Photo by Tafadzwa Ufumeli/Getty Images) , Photographer: Tafadzwa Ufumeli/Getty Images Europe

The coronavirus outbreak has highlighted the continent’s reliance on imported vaccines, with limited shot-making facilities only present in South Africa, Senegal and Egypt. Biovac, which is 47.5% state-owned, is in talks to produce a Covid-19 vaccine at its facilities, and Aspen Pharmacare Holdings Ltd. has agreed to make Covid-19 shots on behalf of Johnson & Johnson at a facility in the southern city of Port Elizabeth.

“It’s important to deal with the current pandemic, but we have to build capability for the future so that we won’t be in a similar situation in ten years,” Morena Makhoana, Biovac’s chief executive officer, said in an interview last week. “You cannot rely on importing vaccines as a country, you need to be self-sufficient.”

While countries from the U.S to the U.K. and China were among the first nations to start inoculating their populations, Africa has barely started -- it accounts for less than 90,000 of the 205 million vaccines administered so far. Few countries on the continent were able to secure supplies, while several Western nations pre-ordered more than enough to cover their populations.

Biovac, which is based in Cape Town, last year began making the first vaccines in South Africa since the mid-1990s, a pediatric shot made under license from Sanofi Pasteur Ltd.

It will start producing pneumococcal vaccines under license from Pfizer Inc. by the fourth quarter. Once it manages to sign an agreement to make a coronavirus shot, production could start within 12 months, Makhoana said. He declined to identify which vaccine developer Biovac is negotiating with.

“We have the capability to develop and manufacture bacterial vaccines, but we need to build capability of developing viral vaccines, that will give South Africa a solid footing to deal with future pandemics,” said Makhoana. “With support from government and tech-transfer partners we believe we can raise the funds to add what we need, using the foundation that we have built.”

Biovac will consider taking out loans to finance expansion, he said. It can currently manufacture about 20 to 30 million doses annually, while Aspen’s facility can produce as many as 300 million.

Biovac has so-called fill-finish capability, which means it can fill vaccine vials and package them. Makhoana said it now wants to start producing the raw materials used to make the shots. It would need a bigger market than the South African one to justify the investment, and could model itself on vaccine makers in India and China.

“We want to build capacity to sell beyond South Africa to build economies of scale,” he said. To supply other parts of Africa, conversations with programs such as Covax, an initiative to distribute Covid-19 vaccines equitably, and GAVI, the global vaccine alliance, will be needed, he said.