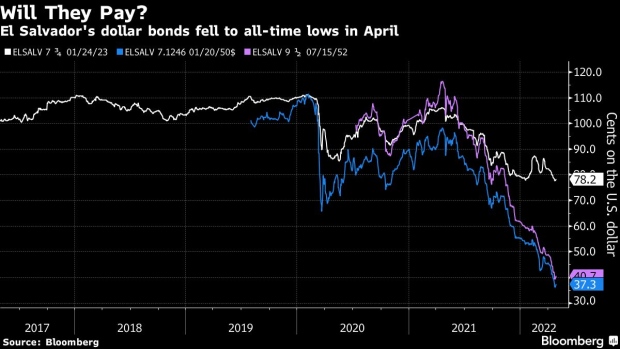 Anti-Bitcoin graffiti in San Salvador, El Salvador, on Saturday, Jan. 29, 2022. The International Monetary Funds board urged El Salvador to strip Bitcoin of its status as legal currency due to its large risks, highlighting a major obstacle for the nations efforts to get a loan from the institution. , Bloomberg

(Bloomberg) -- For five months now, El Salvador President Nayib Bukele has been trying to hawk a Bitcoin-backed bond to international investors. This, he’s insisted, is a better option than turning to multilateral lenders in Washington for more conventional financing.

It’s not working. Bukele, a devout believer in crypto currencies, has yet to receive a single penny of the $1 billion he’s seeking, and this -- along with stalled talks with the International Monetary Fund -- is deepening concern among creditors that the country will fail to pay back an $800 million bond at the start of next year.

Prices on the country’s debt collapsed in April, falling 15.1%, a rout only surpassed by bonds in war-torn Ukraine. El Salvador’s benchmark bonds due in 2032 now yield 24%, a level that suggests investors are bracing for default.

Since abandoning talks with the IMF and adopting Bitcoin as official tender last year, investors have soured on El Salvador’s bonds, concerned not only with the ability to keep current on its debt but also the willingness to keep paying under the eccentric 40-year-old Bukele who has flashed authoritarian tendencies. And now, as the January debt maturity approaches, the 78-cent price on the notes shows many bondholders are losing conviction.

“If Bukele has given up on the possibility of bond market financing, why continue to service the debt?” said Jared Lou, a portfolio manager at William Blair Investment Mgmt LLC in New York. “If he is re-elected in 2024, Bukele would have little incentive to pay bonded debt, nor offer a high recovery value on the existing debt. These challenges make it hard for El Salvador to find a floor.”

While plans to raise $1 billion with a Bitcoin-backed bond were unconventional at best, some investors were holding out hope that it could at least bring in some cash to government coffers. It’s not clear at this point whether the transaction will go through.

Neither the presidency’s office nor the finance ministry replied to requests for comment on the drop in bond prices. In recent comments, the finance minister and central bank president have said there’s “zero risk” of the country defaulting.

El Salvador was planning to issue so-called volcano bonds by March using blockchain technology and use half the proceeds to buy Bitcoin. The sale, however, has languished and the government has yet to even present to congress a digital securities bill that’s required for its issuance.

While the proceeds wouldn’t go toward paying the January maturity necessarily, if successful, subsequent transactions could be a source of financing going forward.

It was part of a bigger plan to attract crypto enthusiasts and digital nomads to live in a community to be dubbed Bitcoin City that would be powered by geothermal plants installed at a nearby volcano.

The IMF, often a lender of last resort, has urged the government to back track on its adoption of the cryptocurrency, saying it imposes significant risks to financial stability. Talks with the country for an extended fund facility have stalled and the multilateral lender said it must assess Bitcoin risks before agreeing to a loan.

Fitch cut El Salvador to CCC in February citing increased reliance on short-term debt, limited financing sources and a rising public debt-burden which is expected to reach 87% of gross domestic product in 2022.

The extra yield investors demand to hold the nation’s notes over U.S. Treasuries blew out to 22 percentage points this month, well above the 10 percentage-point threshold for debt to be considered distressed. Its 2050 bond now trades at 37 cents from 96 cents one year ago. There are about $3.3 billion in reserves at the central bank.

“El Salvador is in need of a fiscal reform and likely an IMF program that could provide fresh funds and remove some of the short term debt burden, but at this moment achieving a deal seems like an uphill battle.” said William Snead, a strategist at BBVA in New York, who expects the government to pay the bond in January.

And then there are other issues weighing on the credit.

Bukele recently sought and was given emergency powers to crack down on gangs following a spate of killings, tweeting out pictures of tattooed men he claimed were gang members being detained. More than 16,000 people have been arrested as part of the operation which has caused alarm among human rights groups over the lack of due process. Diplomatic relations with the U.S. have also frayed.

And like many poor developing nations, El Salvador is being hit by a surge in costs to import food and energy at a time when the U.S. Federal Reserves begins to raise rates.

The speed of the deterioration has surprised many investors and strategists, including Nathalie Marshik, a managing director of fixed income at Stifel Nicolaus & Co. who did an investor trip to the country in February.

“If you told me after I came back from the trip that the bonds would drop 15 points I would not believe you,” she said. “It’s a combination of factors.”