Bitcoin has recovered most of the eye-popping losses registered at the start of the week, proving naysayers were too quick again to forecast the end of the recent surge in the controversial digital asset.

The world’s largest cryptocurrency jumped as much as 7.5 per cent to US$40,094 on Thursday. Bitcoin tumbled more than 25 per cent in a 24-hour period on Sunday and Monday. Crypto peers, including Bitcoin Cash and Litecoin, also surged, each adding at least 7 per cent.

“It should come as no surprise to anyone that Bitcoin has bounced back so quickly,” wrote Craig Erlam, senior market analyst at Oanda Europe. “We know it’s an extremely volatile instrument -- the only difference this time is the absolute numbers are now much larger due to its growth over the last month.” 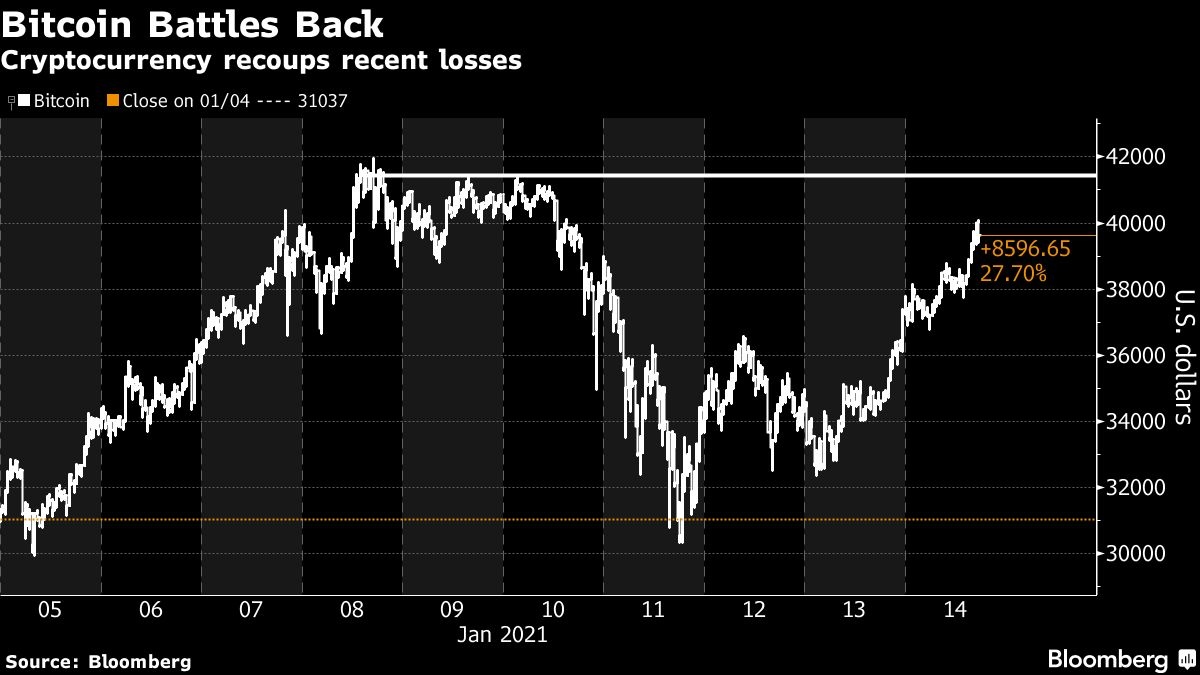 A combination of institutional adoption and retail investor involvement, among other factors, is pushing prices higher, according to Mike McGlone, commodity strategist with Bloomberg Intelligence.

“This is a very unique phase in the Bitcoin process of price-discovery that favors a strong rally,” he said.

Bitcoin is coming off a surge last year that saw it gain more than 300 per cent. Skeptics worry it’s run too far, too fast, with many saying its advance is emblematic of a market overloaded with speculative behavior. Crypto fans, on the other hand, say the red-hot gains are well-founded: the pandemic-ravaged environment bred the perfect conditions for the digital coin amid global central bank money-printing.

Crypto-centric products have seen a surge in popularity in recent weeks as investors rushed to get a piece of the action. Grayscale, which is behind a popular Bitcoin trust, has seen an uptick in demand. The company said it saw total inflows of more than US$3 billion across its products in the fourth quarter. Its Bitcoin trust, which is known by its ticker GBTC, saw average weekly investments of around US$217 million during that stretch.

“Bitcoin to us is the leading edge of what the investment thesis of 2021 is all about,” Julian Emanuel of BTIG said in an interview with Bloomberg Television this week. He projects the coin could reach US$50,000 by year-end, which implies a 26 per cent rally from current levels.