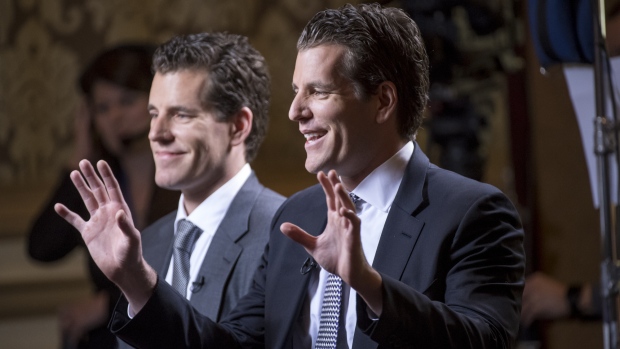 “We are definitely considering it and making sure that we have that option,” Cameron Winklevoss, co-founder and president of the New York-based digital-asset firm, said in an interview. “We are watching the market and we are also having internal discussions on whether it makes sense for us at this point in time. We are certainly open to it.”

Bitcoin has more than quadrupled in the past year, evoking memories of the 2017 mania that first made cryptocurrencies a household name before prices collapsed the following year. Volatility remains a defining characteristic of the dominant cryptocurrency, with it spiking to almost $42,000 last week before dropping back to around $37,000.

An initial public offering, direct listing or even a merger with special purpose acquisition company would be the latest attempt by early advocates of Bitcoin such as the Winklevoss brothers to unlock their digital wealth. Coinbase Global Inc., the biggest U.S. cryptocurrency exchange, filed in December with the Securities and Exchange Commission to go public. Bakkt Holdings LLC, the cryptocurrency platform majority-owned by Intercontinental Exchange Inc., plans to go public through a merger with a blank-check firm.

The twins, initially known for suing Mark Zuckerberg for stealing their idea for Facebook Inc., have been long-time supporters and holders of Bitcoin. They started Gemini -- now a New York trust company regulated by the New York State Department of Financial Services -- in 2014, and the business includes an exchange and a custody service. The brothers are worth about $2 billion each, according to the Bloomberg Billionaires Index.

To drive new U.S. customers to the exchange, the company announced Thursday the launch of the Gemini Credit Card, which will function like a traditional card but offer up to 3% back in Bitcoin or other cryptocurrencies on every purchase made. Rewards will be automatically deposited into cardholders’ Gemini accounts.

“Cash is trash,” Gemini Chief Executive Tyler Winklevoss said, repeating a common theme among crypto advocates that inflation will erode the purchasing power of the dollar. “So as you spend your cash you get Bitcoin -- it’s a pretty good trade off.”

Gemini bought startup Blockrize in the third quarter for an undisclosed sum for the credit-card effort. Overall, the company has about 350 employees.

The Winklevoss twins are still interested in offering a Bitcoin exchange-traded fund. They were the first to file for such an ETF in the U.S. years ago, but were rejected by the SEC in 2017 due to the immaturity of the crypto market and lack of regulatory oversight.

“We still believe in this product, we are still committed to this product,” Cameron Winklevoss said. “I don’t think that we have more to add at this moment.”

The Winklevoss brothers have been among the most optimistic forecasters for the price of Bitcoin, saying it will reach $500,000 within 10 years.

“We are very much ‘hodlers’ at this price,” Cameron Winklevoss said. “We have a lot of exposure as it is, so we are not actively looking to increase our position.”