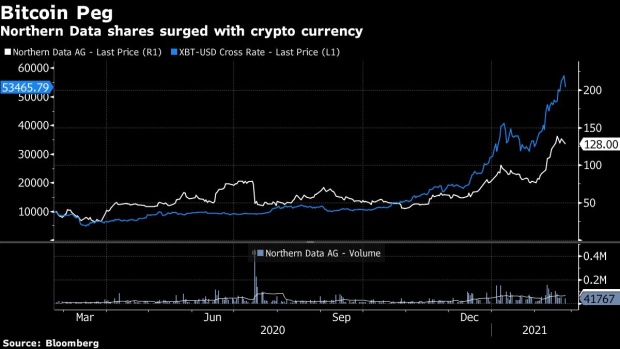 Racks of application-specific integrated circuit (ASIC) devices and power units operate inside a rack at the BitRiver Rus LLC cryptocurrency mining farm in Bratsk, Russia, on Friday, Nov. 8, 2019. Bitriver, the largest data center in the former Soviet Union, was opened just a year ago, but has already won clients from all over the world, including the U.S., Japan and China. Most of them mine bitcoins. Photographer: Andrey Rudakov/Bloomberg , Bloomberg

(Bloomberg) -- Northern Data AG, the operator of the world’s largest Bitcoin mine, is working with Credit Suisse Group AG on plans for a U.S. listing that could raise as much as $500 million, according to people familiar with the matter.

The sale of new shares, which could go ahead later this year, will boost Northern Data’s shareholder base as well as its global profile, the people said, declining to be identified because the information is private.

Since 2015, Northern Data has been listed on Germany’s over-the-counter market, where its shares have more than tripled over the past year. Its investors include German entrepreneur Christian Angermayer as well as Block.One founder Brendan Blumer.

Spokespeople for Credit Suisse and Northern Data declined to comment.

Based in the outskirts of Germany’s financial hub Frankfurt, Northern Data operates high-performance computing centers in areas with cheap electricity. Its largest facility, located in Rockdale, Texas, is currently the world’s largest mine with a planned capacity of 1 gigawatt by year-end.

Led by Chief Executive Officer Aroosh Thillainathan, the firm started as a Bitcoin miner but later shifted to operating the mines on behalf of clients. Bitcoin hit a market value of $1 trillion late last week, a surge that’s helping cryptocurrency returns far outstrip the performance of more traditional assets like stocks and gold.