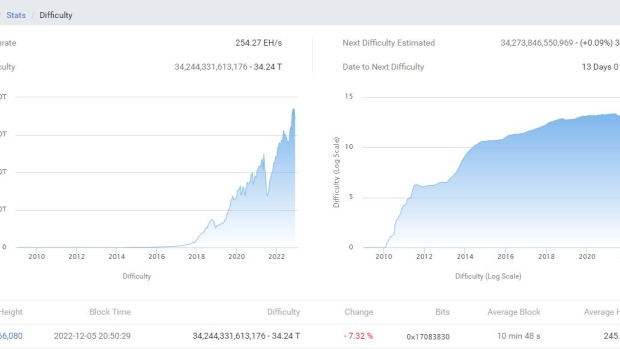 Stacks of mining rigs mine the Ethereum and Zilliqa cryptocurrencies at the Evobits crypto farm in Cluj-Napoca, Romania, on Wednesday, Jan. 22, 2021. The world’s second-most-valuable cryptocurrency, Ethereum, rallied 75% this year, outpacing its larger rival Bitcoin. , Bloomberg

(Bloomberg) -- Bitcoin miners are sending a signal that suggests they’ve reached the point of capitulation, raising hope among beleaguered crypto enthusiasts that the digital-asset market collapse may be nearing a bottom.

Mining difficulty, a measure of the total amount of computing power dedicated to minting the tokens, dropped by 7.3% over the most-recent two-week period ended Monday. That’s the biggest decline since July 2021, shortly after China banned the process, forcing operations in the nation to shut down computing facilities.

That’s viewed as a sign by some analysts that miners are throwing in the towel. The rate had jumped in recent months as miners sought to win more market share to help offset the plunge in the price of Bitcoin. Halting operations suggests that miners have exhausted reserves and are struggling to raise cash to keep their rigs running. Bitcoin has tumbled about 75% from an all-time high of around $69,000 reached in November 2021.

“If you look at what is happening with miners giving up their hardware and the length of the bear market, this is the point in the last bear cycles where things started to turn around,” said Andy Long, chief executive at Bitcoin mining firm White Rock, who started mining in 2013. “It is always the darkest before the dawn.”

While selling of the tokens by Bitcoin miners to raise cash to fund operations isn’t as large as it used to be since inventories are lower, that was still a significant factor in depressing prices recently, said Matthew Kimmell, digital asset analyst at CoinShares. Miners mint about 900 coins daily through the process where they compete to solve computational puzzles to unlock rewards in exchange for processing the transactions on the blockchain.

Major miners sold off the bulk of their Bitcoin holdings during the spring-time market crash, but continued to run rigs for a few months, as reflected in the recent rise in computing power. Some over-leveraged miners are finally running out of money and may sell off their mining assets at a discount, Long said.

Besides the sharp declines in Bitcoin prices, energy costs have compressed miners’ profit margins as well. More computing power on the Bitcoin network means less rewards in the form of the token for miners.

Miners are among the most adamant Bitcoin holders. Even if the selling pressure is not that important as a market signal, their Bitcoin sales can show you the market sentiment at some level, Kimmell said.