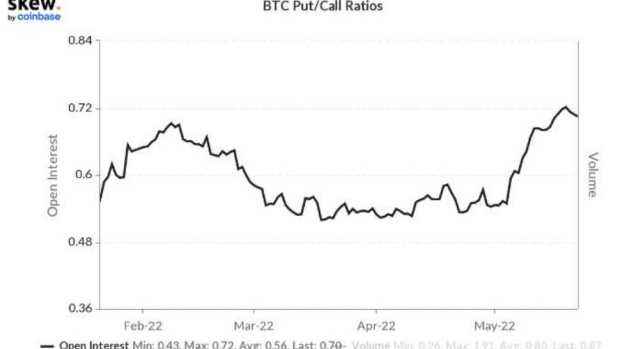 Bitcoin might be registering tepid moves as of late but that doesn’t mean investors have become less anxious about the largest cryptocurrency’s prospect for further declines.

The put-to-call ratio on the coin hit a 12-month high at 0.72, meaning that many traders are loading up on hedges in the event it embarks on another leg lower and its losses deepen. The ratio hit a high of 0.96 April last year before prices plunged roughly 50% the following month, according to option Skew data compiled by Babel Finance.

It “signals cynicism in the markets with rising bearish sentiment,” said Josh Olszewicz, head of research at Valkyrie Investments. “Given the macro situation globally, and the near uniform risk-off trade currently dominating most asset classes, traders have followed suit with their Bitcoin strategies.”

Bitcoin and other cryptocurrencies have been mired in a downturn all year, with the largest digital asset shedding 37% of its value. Smaller and lesser-known tokens have fared even worse, with Dogecoin, a once beloved pandemic-favorite investment, down 54% since December. XRP and Bitcoin Cash are down a similar amount, while Avalanche and Solana has lost more than 70% in 2022, according to data compiled by Bloomberg.

Wilfred Daye, chief executive officer of Securitize Capital, a digital asset management firm, also points out that during the past few weeks, put implied volatility became “super expensive.” As suspected volatility picked up, implied volatility rallied across the curve, signifying that “more people are buying options above their intrinsic value,” he said. “It shows more people are willing to pay more for puts,” right now.

The spike in the put-to-call ratio “does signal a bit of a market shift,” said Stephane Ouellette, chief executive of FRNT Financial Inc. “Long term believers in the space are very emotional about their crypto positions and not selling. That said, buying some options to protect against market volatility is probably more ‘allowable’ in that context.”

More important might be the fact that the coin “can turn around so fast that while you may think it’s going lower in the interim, you don’t want to sell your position altogether because things can take off very quickly,” he added. “Put options make some sense in that dynamic.”

Investors who once were hot on crypto have cooled on its prospects as the Federal Reserve’s rate-hiking regime spurs volatility in the market and dulls previously-hot growth and speculative assets. Guggenheim Partners Chief Investment Officer Scott Minerd said he expects Bitcoin to fall to $8,000. He had once predicted that it could reach $400,000.

Bitcoin slumped as much as 3% to $28,860 on Thursday. It had closed below $30,000 the previous six trading sessions during New York hours.

Peter Mallouk, president of Creative Planning, says Bitcoin and other cryptos have been correlated to tech, meaning their tend to move in the same direction. “It’s speculation,” he said by phone. “People aren’t buying it to use it as money. They’re buying it to speculate, and that’s become more apparent now than maybe it was this time a year ago.”

Valkyrie‘s Olszewicz sees a silver lining in the put-to-call data. “Typically, markets reverse after bearish exhaustion, once the put/call ratio reaches a local crescendo,” he said.