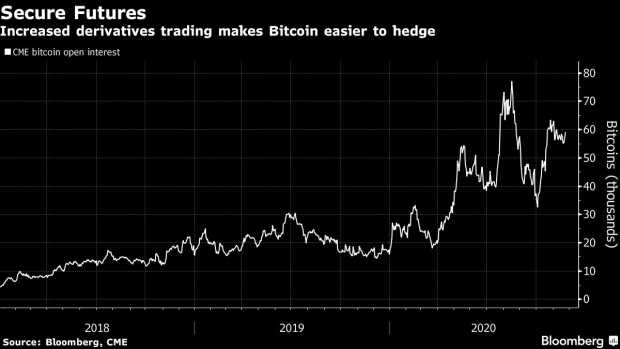 (Bloomberg) -- Even with a big selloff Thursday, Bitcoin’s rebound toward all-time highs this week is no sign of a speculative bubble but the growth spurt of a major asset class in the making, say crypto diehards.

And while the trading doesn’t always run smoothly, the $315 billion digital coin is far deeper and more liquid than it was during last boom in 2017.

“Bitcoin has the potential to become for our global monetary economy what the Internet has been for our global society,” said Tancredi Cordero, founder of Kuros Associates in London. “The main concern and turning point for Bitcoin are trust, adoption and regulation.”

Here are a few charts that help explain Bitcoin’s growth:

The number of Bitcoin users continues to grow, giving it an advantage that’s hard for rivals to surpass. There are now more than 30 million wallet addresses with active balances, according to data from ByteTree.com and Glassnode.

The rapidly expanding Bitcoin futures market at CME Group is another example of the convergence in crypto trading and mainstream finance. Open interest has tripled this year, making it easier for investors to trade in the market.

In 2017, one of the issues plaguing the market were long delays for transactions to be executed. The problem has largely been addressed through the software changes and pooling of transactions.

Times for the mempool -- a kind of virtual waiting room for transactions ready to be processed -- has collapsed from levels seen in late 2017, according to data from Blockchain.com.

“It’s different now,” said Mati Greenspan, chief executive of market advisory firm Quantum Economics in Tel Aviv. “The last time we saw Bitcoin get this high, the blockchain was close to collapsing, but the network has had improvements since then.”

With so many bonds offering so little yield, traditional investors are being forced to re-evaluate their asset class mix.

In a report in October, Fidelity Investments said Bitcoin’s low correlation to traditional assets is an “encouraging first sign” that the currency could be used as a portfolio diversifier.

The biggest crypto is barely correlated with any of the major assets.

Computing power devoted to running the Bitcoin network has soared over the past two years. The has rate, a common term of measurement, has grown exponentially in a reflection of the greater investment in computers to turn around transactions and record them faster on the blockchain.