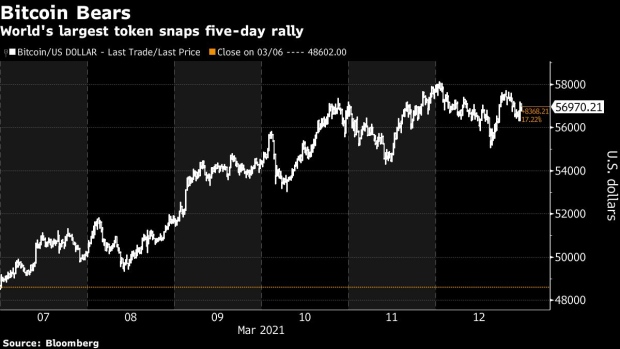 (Bloomberg) -- Bitcoin declined for the first time in six trading sessions alongside a broader easing of risk-on sentiment in financial markets.

“The bears’ last stand is the $57,800 level, and it looks like we might be seeing that battle play out before the week is over,” said Matt Blom, global head of sales trading at EQUOS. “On the downside, continued selling above $57,000 will see us slip back toward $56,620 and potentially $55,000. Any move below here will be supported by dip-buying bulls and dip-buying bears alike.”

Meanwhile, Bloomberg reported Friday that the largest cryptocurrency exchange, Binance Holdings Ltd., has come under scrutiny from the Commodity Futures Trading Commission over concerns that the company may have allowed Americans to place bets in violation of U.S. rules.

The digital asset is up nearly tenfold in the past year as optimism over rising institutional demand pushed prices to record highs. While some say that Bitcoin is a stimulus-fueled bubble likely to burst, industry participants argue that institutional adoption will prevent Bitcoin from plummeting from its highs as was witnessed in 2017-2018.