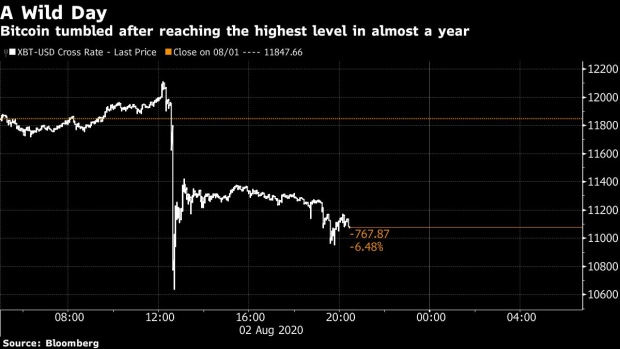 (Bloomberg) -- Bitcoin reminded investors of both its promise and peril in trading this weekend.

The world’s largest cryptocurrency rose to $12,112 in trading just after midnight New York time, its first foray above $12,000 since August 2019, according to pricing compiled by Bloomberg. But it plunged shortly thereafter -- 30 minutes after that high, it had dropped to $10,638.

“Clearing resistance at $10,000-$10,500, which coincided with the downtrend line from the late 2017 highs and first-quarter 2020 highs, established a higher high for Bitcoin confirming a new tactical uptrend,” according to Rob Sluymer, technical strategist at Fundstrat Global Advisors LLC.

“In the short-term Bitcoin’s daily momentum indicators are overbought (as they are for gold), but beyond some very near-term choppy trading, Bitcoin is likely to continue to trend to its next resistance level at $13,800.”

Bitcoin has rallied strongly in recent days after rising above $10,000. It had fallen as low as $4,904 in mid-March around the height of coronavirus-fueled market uncertainty, but by mid-May was back around $9,000. While cryptocurrencies’ volatility continues to attract skeptics, JPMorgan Chase & Co. in June noted that Bitcoin’s rally back from the March depths suggests it has staying power. The cryptocurrency’s notable moves both last weekend and this one recall a similar phenomenon in 2019, when outsized gains took place numerous times during Saturday and Sunday trading as the price rose from a few thousand dollars into five-digit range.