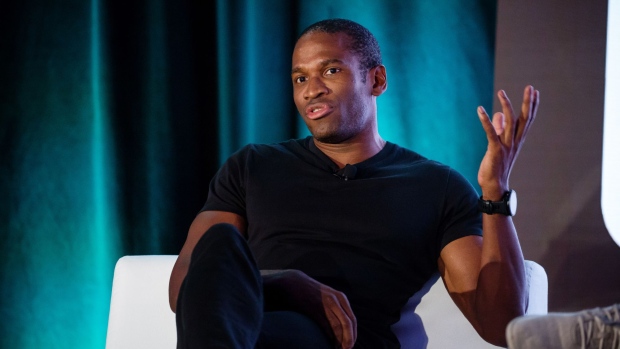 (Bloomberg) -- When BitMEX co-founder Arthur Hayes was accused in 2020 of allowing money laundering on the cryptocurrency exchange, prosecutors cited a joke he made about using a coconut to bribe officials in the Seychelles, where the company is based, as evidence of his desire to avoid regulation.

But U.S. District Judge John Koeltl on Thursday blocked the government from presenting the “coconut” comment during the criminal trial of Hayes and other BitMEX executives in March.

Hayes “spoke in a plainly jocular fashion” and the video of his comments is “highly inflammatory” because it suggests bribery is taking place, Koeltl said. “There’s no evidence of bribery in the Seychelles, and plainly the relevance of the segment is outweighed by the danger of unfair prejudice.”

The quip was made during a heated debate between Hayes and economist Nouriel Roubini at the Asia Blockchain Summit in July 2019, dubbed the “Tangle in Taipei.” Roubini accused cryptocurrency exchanges of skirting laws by operating in jurisdictions with little oversight. But Hayes defended the company’s decision to be in the Seychelles, saying BitMEX is subject to regulations even if not located in the U.S.

When asked if he understood that regulators in the Seychelles were “on a different scale” as those in the U.S. and other countries, Hayes replied that in those jurisdictions, “it just costs more to bribe them.” When asked by the event moderator how much he paid to bribe regulators in the Seychelles, Hayes said, “a coconut,” to laughter from the audience.

The three men are scheduled to go on trial on the charges on March 30, while Gregory Dwyer, the company’s first employee and former head of business operations, is being tried separately in October.

The co-founders have asked Koeltl to throw out the case before trial, saying that the charges are a “test case” in which prosecutors are seeking “to enforce criminally two highly technical statutory regimes in a novel set of circumstances where the line between criminal and innocent conduct was unknowable.”

“No person of ordinary intelligence could have understood that the executives of an offshore, direct-access exchange for trading cryptocurrency derivatives, as the indictment alleges BitMEX was, were subject to criminal sanctions under the Bank Secrecy Act for failing to adopt an anti-money laundering program,” the co-founders said.