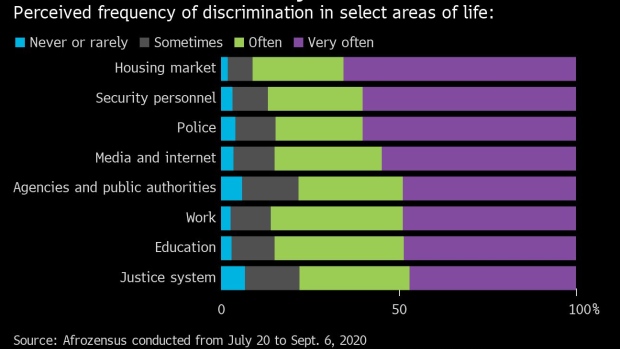 (Bloomberg) -- Black people living in Germany face pervasive issues with racism and discrimination, according to a survey which marks the first wide-scale effort to tally the community’s experiences.

“The results of the Afrozensus indicate that anti-Black racism is widespread in Germany and anchored in institutions,” a press release of the report said on Tuesday. “There is no area of life in which discrimination and racism are not extensive problems.”

The survey, which was jointly organized by a Berlin-based Black community group called Each One Teach One and Citizens for Europe, offers some of the first insights into the more than 1 million people living in Germany with an African background. It surveyed close to 6,000 respondents between July and September 2020.

Germany hasn’t collected information on the ethnic or racial background of its residents since the end of World War II, with the government arguing that authorities should never again be able to identify communities at risk of persecution. While the intent may be well-meaning, critics of the approach have argued that the resulting lack of data allows racism to be swept under the rug by making it nearly impossible to track.

Read more about the Afrozensus here

The country’s racial makeup is more complex than what’s reflected in official statistics, which classifies people as foreigners, Germans, or Germans “with a migration background.” The latter category lumps together diverse communities and doesn’t account for the descendants of second- or third-generation immigrants, who may still be subject to discrimination.

One in four of the Afrozensus respondents, for instance, doesn’t have a “migration background”, according to the report.

The housing market, security services and the police were identified as areas that are particularly prone to anti-Black discrimination, with over 60% saying it occurs “very frequently.”

The survey also showed that Germany’s Black community was particularly hard hit by the economic effects of the pandemic. Nearly one in seven respondents said they lost their jobs due to the crisis.