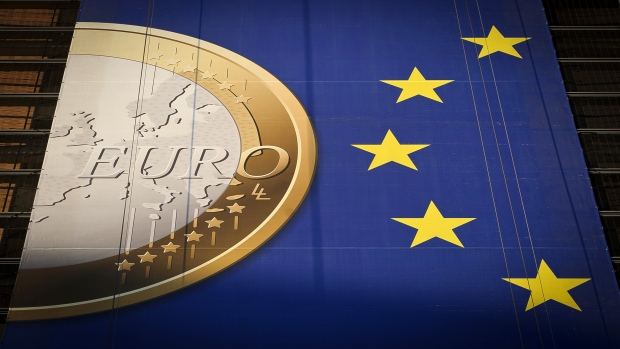 A giant euro banner, featuring an image of a euro coin and promoting stronger European economic governance, hangs on the side of the headquarters of the European Union commission at the Berlaymont Building, in Brussels, Belgium on Monday Nov. 21, 2011. , Bloomberg

Here’s the latest sign ETFs are beating down the door into the clubby world of European corporate debt.

Trading in an US$11.2 billion BlackRock Inc. fund that holds euro-denominated credit has climbed to about 3 per cent of volume in the region’s high-grade corporate bonds, according to monthly data provided by the asset manager. While still a modest slice of the pie, that’s around double the average over the past five years.

The largest fixed-income ETF in Europe -- ticker IEAC -- is headed for its biggest monthly inflow ever in June, following sizable withdrawals in May. Ups and downs in flows are becoming typical as assets in the fund have grown 47 per cent this year.

Exchange-traded funds like BlackRock’s, which hold portfolios of bonds but trade like stocks, are injecting much-needed liquidity into a market that’s long been conducted at a glacial pace with big gaps between bid and offer prices.

As credit rallies spurred by dovish signaling from central banks, investors are dipping in and out of fixed-income ETFs at an increasingly frenzied pace, going long and short, hedging other exposures, even warehousing cash ahead of new bond sales.

Given “more assets, a broader investor base, more uses for the ETF and some volatility in the market, you would expect to see flows and trading volumes to continue to increase,’’ said Vasiliki Pachatouridi, fixed income product strategist at BlackRock’s iShares.

Investor-to-investor trading volumes have nearly doubled year-on-year, according to Pachatouridi. Institutional investors from pension funds to insurers are able to push through large block trades of IEAC shares.

Even as they churn more, ETF flows aren’t always a reliable indicator of sentiment. Sometimes outflows point to a busy market for new bond sales: investors keep ETFs in store when the primary market is slow, then sell them to get cash when new issues hit.

“There is much more appetite for fixed-income assets,’’ said Mark Fitzgerald, head of Europe ETF product management at Vanguard. “Clients that were more equity-focused are now looking at the diversification you get from fixed income.’’

While it’s easy to trade ETFs, there’s concern that getting out of them may not be so simple when there’s a rush to the exits in a market downturn. When they’re hit with outflows, ETF managers may have to sell illiquid corporate bonds to redeem their investors.

Unigestion SA warn that ETF liquidity may turn out to be a mirage, comparing the funds to the collateralized debt obligations of a decade ago, which provided a false sense of security because their top ratings masked souring collateral.

ETF managers respond by pointing out they don’t need to match the benchmark bond-by-bond so long as they can match its characteristics in terms of yield and credit quality.

And in a typical month, ETFs need to replace bonds set to drop out of the index they track anyway. BlackRock can do this, while dealing with inflows and outflows mostly “in kind.”