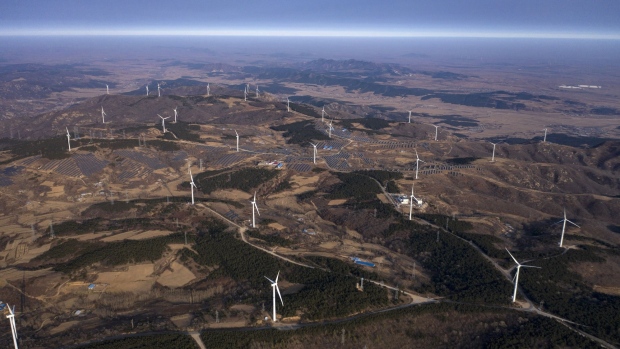 (Bloomberg) -- BlackRock Inc. has raised $4.8 billion for a new fund to invest in renewable power assets around the world - almost double its initial target.

The company’s real assets division closed on its third global renewable power fund, drawing money from over 100 institutional investors. It’s the latest sign of increasing interest from investors to buy into the surging green power sector.

“You’re seeing a major shift in institutional interest in decarbonization and wanting to allocate into it,” said Jim Barry, chief investment officer of BlackRock Alternatives Investors. “The pandemic has only sustained and added to that momentum.”

The fund’s managers had originally targeted about $2.5 billion when they started raising money in the second half of 2019. They continued beyond that goal last year and added another $1.2 billion in the first three months of this year. The demand is driven partially by investors wanting to tap into the fastest growing part of the power sector as well as a hunt for yield, Barry said.

This is the largest renewable power fund to date for BlackRock Real Assets, nearly triple the size of the previous fund.

BlackRock has already started investing the fund’s money, including an American solar company and a solar power developer in Taiwan.

The company plans to invest mostly in wind and solar assets in Europe, the U.S. and some countries in the Asia Pacific region like South Korea, Japan and Taiwan. BlackRock has already signed a deal linked to offshore wind in Asia.

While in the past the company mostly bought construction-ready or operational renewable power assets, this time they are diversifying to earlier-stage projects and also buying into developers. The fund will also look to invest in other technologies like smart meters, smart power grids and infrastructure to support electric vehicle.