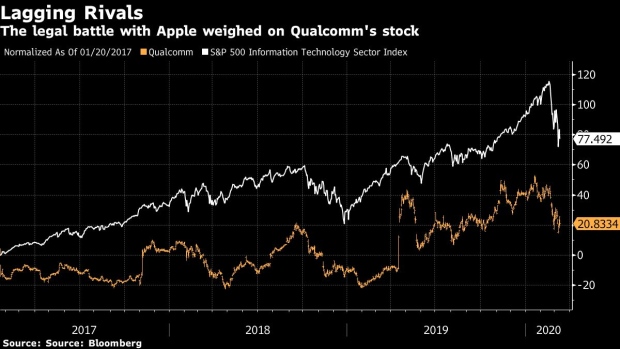 (Bloomberg) -- BlackRock Inc. criticized Qualcomm Inc. for granting $11.3 million of equity awards to a group of senior executives, saying the chipmaker’s board failed to justify why Chief Executive Officer Steven Mollenkopf deserved a special payment just for doing his job.

The awards, coming on top of the executives’ normal multimillion-dollar compensation packages, were granted last year after Qualcomm resolved a two-year legal dispute with Apple Inc. over licensing fees -- a battle that weighed on the stock price.

The board granted them considering “the anticipated long-term stockholder value” that will result from the deal with Apple, Qualcomm said in a January filing.

BlackRock responded that the board’s reasoning wasn’t sufficient. In a voting bulletin disclosed Wednesday, the world’s largest money manager, with $7 trillion of assets, said the awards were “difficult to reconcile” with the performance of Qualcomm’s shares.

The directors “did not provide sufficient justification why this outcome with Apple is outside Mr. Mollenkopf’s realm of responsibilities as CEO,” said BlackRock, the second-biggest Qualcomm shareholder.

A representative for the San Diego-based chipmaker declined to comment.

BlackRock wasn’t alone in its rebuke. A majority of shares cast at Qualcomm’s annual meeting Tuesday rejected the executive compensation plan -- a rare admonishment for a public U.S. company. Most receive overwhelming approval.

Barbara Alexander, a former UBS Group AG managing director, chairs the committee. It also includes Irene Rosenfeld, who was CEO of Mondelez International Inc., and Mark McLaughlin, who was paid hundreds of millions of dollars while serving as CEO of Palo Alto Networks Inc.

Qualcomm hasn’t yet disclosed the final tally of the pay vote. While such referendums are non-binding, many directors watch the figures closely. Poor results are embarrassing, may impact their chances of securing other board seats and can draw the attention of activist investors.

Excluding the special award, Mollenkopf received a compensation package worth about $19.5 million. Qualcomm handed out a total of $122 million of special equity awards to employees, including the senior executives.

BlackRock publishes voting bulletins periodically to be more transparent about its engagements with companies in which it owns stakes.

--With assistance from Ian King.

To contact the reporter on this story: Anders Melin in New York at amelin3@bloomberg.net