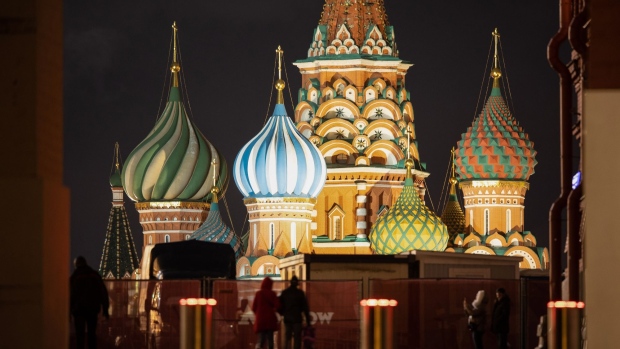 Saint Basil's Cathedral on Red Square at night in Moscow, Russia, on Friday, Nov. 12, 2021. The U.S. is raising the alarm with European Union allies that Russia may be weighing a potential invasion of Ukraine as tensions flare between Moscow and the bloc over migrants and energy supplies. , Bloomberg

(Bloomberg) -- BlackRock Inc. will begin a long process of shuttering a major Russia exchange-traded fund, after the protracted Ukraine war has slashed the value of securities linked to the region and left their fate in limbo.

The iShares MSCI Russia ETF (ticker ERUS) will begin closing on Aug. 17 and proceeds from the few assets that can be liquidated will be distributed to shareholders, BlackRock announced in a press release on Wednesday. Most of the fund’s holdings currently can’t be sold due to sanctions or trading halts, so BlackRock expects the entire liquidation of the fund to take “an extended period of time.”

ERUS is the first major Russia-focused ETF in the US to liquidate. The fund once held over $800 million at the peak of its assets in 2018, but the value of its holdings tumbled to effectively nothing in the wake of the Ukraine invasion. Russia-focused ETFs based in Europe, including two offered by BlackRock, had already started closing earlier this year.

ERUS primarily holds Russia ordinary shares, which the Russian government has barred foreigners from selling, as well as depository receipts that are currently halted on US and UK exchanges. The few holdings that can be dispersed to shareholders are cash that the fund holds and proceeds from a money-market fund.

The money manager expects ERUS to exist until at least Dec. 31, 2023, so it can sell its remaining holdings. After that date, if the fund can’t liquidate all its assets, BlackRock can terminate the fund at any time and shareholders would have no guarantee of receiving proceeds related to Russian securities and depositary receipts.

“It seems like a very fair way to wind down the fund,” said Steve Sosnick, chief strategist at Interactive Brokers. “They’ll distribute what they can now and leave open the opportunity that sometime in the next year and a half, if there’s an opportunity for them to actually realize some value from their holdings, they’ll pass those along.”

The financial fallout from the Ukraine war has created a massive headache for ETF issuers. Russia-focused ETFs stopped trading shortly after the war started on Feb. 24, a first for the industry whose products had continued to trade in previous geopolitical crises. While some issuers have implemented voluntary waivers of fund-management fees they charge investors, issuers are still bleeding costs from maintaining the funds, which include paying banks fees to handle Russian depositary receipts.

The situation has also created havoc for many ETF investors, with some options traders unable to cash out and short sellers paying borrowing fees indefinitely.