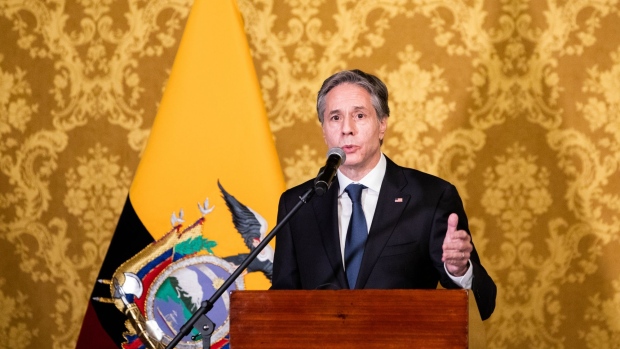 (Bloomberg) -- Secretary of State Antony Blinken called Venezuela’s decision to withdraw from talks with the political opposition “deeply unfortunate,” saying the move showed how President Nicolas Maduro put his own interests ahead of his country’s.

Speaking at a news conference in Quito, Ecuador, Blinken said the extradition of Colombian businessman Alex Saab, an ally of Maduro’s, had been “going on for the better part of a decade.” He denied any link between the move and the U.S. push for Maduro to clear the way for democratic elections in Venezuela.

“It’s deeply unfortunate that the Maduro regime pulled out of the talks in Mexico,” Blinken said. “But I think it’s also indicative, unfortunately, of Mr. Maduro putting self-interests ahead of the interests of the Venezuelan people, which manifestly would benefit from putting Venezuela back on a democratic path.”

Blinken is on his first trip to South America as the top U.S. diplomat, and expected to give a speech Wednesday underscoring U.S. support for “vibrant, inclusive democracies that respect the rights of their citizens,” Assistant Secretary for the Western Hemisphere Brian Nichols told reporters last week. Venezuela has “among the worst human rights records in our hemisphere,” Nichols said.

Venezuela announced the decision to leave the talks on Oct. 16, soon after Saab was extradited from Cape Verde to the U.S. where he is now in custody. Saab, who faces money laundering charges in a U.S. court in Miami, was recently added as a member of the Venezuelan government’s negotiation team.

The charges against him stem from his involvement with the Venezuelan government starting in 2011 under the late Hugo Chavez, Maduro’s predecessor.

Venezuelan security forces also again detained six Citgo Petroleum Corp. executives, who had been released in May to house arrest in what was widely perceived as peace gesture to the U.S. All but one of the executives are American citizens.

“There’s been a process underway now for some years for his extradition and that proceeds independent of anything that is happening on a political track,” Blinken said.