Bank of Montreal opened earnings season for Canada's Big Six lenders with an earnings beat that was fueled in large part by a sharp drop in credit-loss provisions and a return to profit in its capital markets business.

Net income for the fiscal second quarter, which ended Apr. 30, rose to $1.3 billion from $689 million a year earlier. Back then, BMO and its peers set aside billions of dollars for loans that they feared could go bad as a result of COVID-19’s impact on the economy.

But that tidal wave of sour loans hasn't materialized. Indeed, BMO said on Wednesday it booked just $60 million in total provisions during the latest quarter, compared to $1.12 billion a year earlier and $156 million in the fiscal first quarter. Further underscoring the magnitude of the improved credit landscape: BMO reversed provisions that had previously been booked in three of its four major divisions. 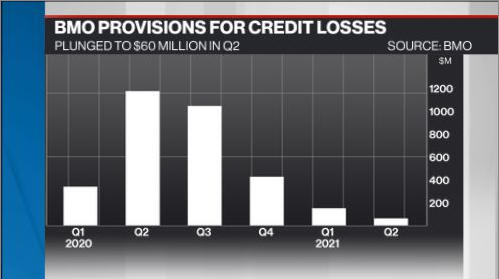 A key measure of the bank's capital war chest continued to swell, with the Common Equity Tier 1 Ratio (CET1) reaching 13.0 per cent, compared to 12.4 per cent at the end of the fiscal first quarter. Most Canadian banks have seen their CET1 levels jump over the last year as a result of the Office of the Superintendent of Financial Institutions' decision to suspend share buybacks and dividend hikes to help shield the sector from the pandemic's economic fallout. 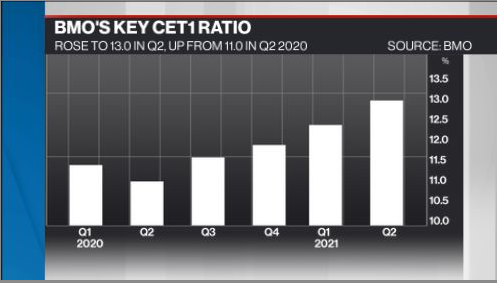 "We enter the second half of the year with strong momentum," said BMO Chief Executive Officer Darryl White in a release.

"We are continuing to build a strong, competitive bank, allocating capital to businesses that are positioned to grow and deliver strong returns, and we are highly focused on continuously improving our performance."

The bank's capital markets unit swung to a profit of $563 million in the fiscal second quarter, compared to a $74-million loss a year earlier. On a sequential basis, the division's profit rose almost 17 per cent.

While profit from its U.S. personal and commercial (P&C) banking operations surged 76 per cent year-over-year to US$434 million, that figure was slightly below the previous quarter's net income.

And the bank's P&C business in Canada saw profit more than double year-over-year to $764 million, which also marked improvement compared to the fiscal first quarter.