Investment strategy for the end of the trading year

Brian Belski, the Bank of Montreal strategist with a knack for nailing year-end forecasts for Canadian stocks, is back.

“I’m very humbled,” Belski said in an interview at Bloomberg’s Toronto office. “First of all, I live and die by my process. I’m an analyst at heart. I have a process that I followed for years and years and years. And I brought that to Canada.”

Belski had a strong track record of calling the Canadian market before his 2018 misstep. His forecast for the S&P/TSX in 2017 was only 1 per cent, or about 200 points below the final closing number. Belski’s 2016 forecast was even more spot on, coming within just 12 points, or 0.1 per cent, of the close. 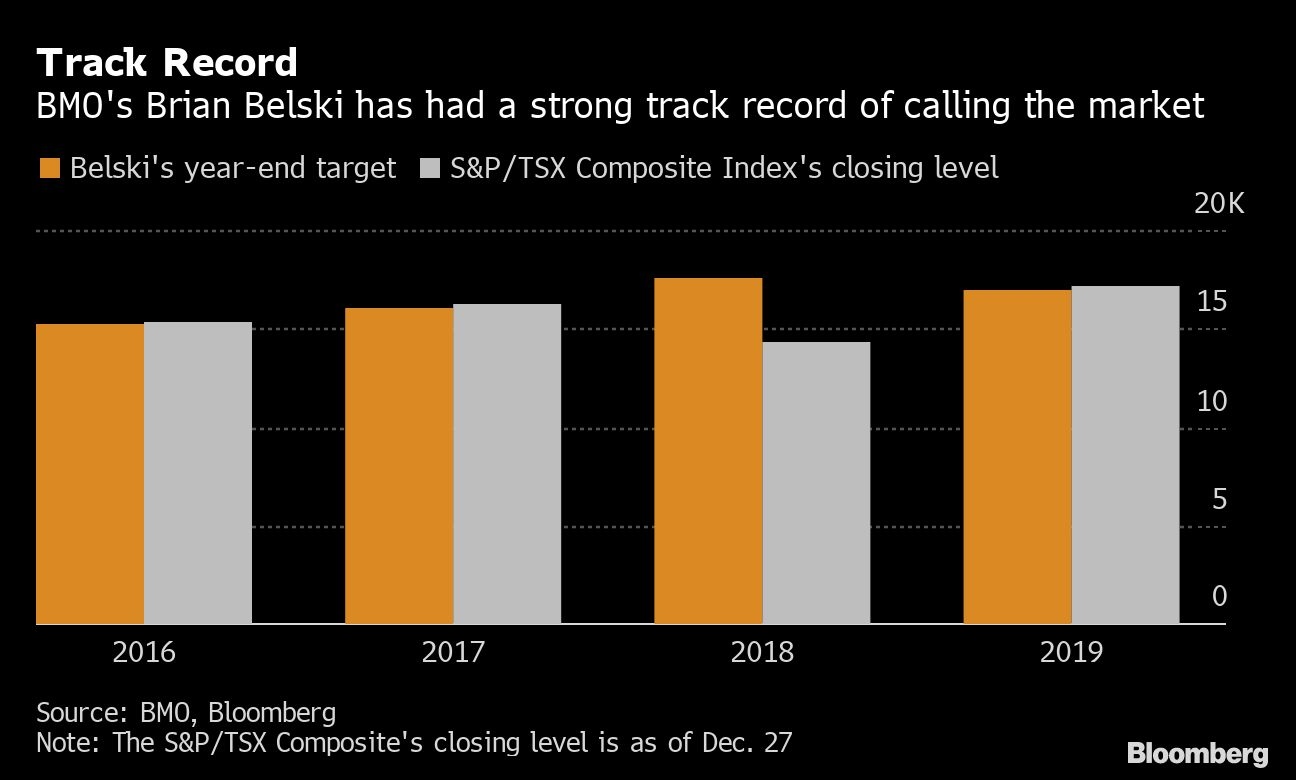 His estimate of 17,600 for 2018 was off by a wide margin as Canadian stocks careened toward their biggest annual plunge since the 2008 financial crisis, ending the year more than 3,000 points, or 22 per cent, below his forecast. At the same time, U.S. equities had their worst December since the Depression a year ago as Donald Trump railed against the Federal Reserve, the government shut down and concerns over global growth were rampant.

Still, in his report published in November 2018, Belski stayed bullish with an initial 2019 target of 18,000, calling it a “contrarian” view. He then tempered his forecast to 17,000 in January after the fourth-quarter rout and Christmas Eve sell-off, adding that Canadian stocks had an “opportunity to under-promise and over-deliver.” Equities have done just that, returning almost 20 per cent, on pace for the best yearly gain in a decade.

Belski’s calling for another year of gains for Canadian stocks in 2020 -- albeit a smaller one -- with a year-end target of 18,200. That’s 6.4 per cent higher than Monday’s closing level. The chief investment strategist at BMO Capital Markets also expects U.S. stocks to rise at a slower pace with a target of 3,400 for the S&P 500, or 5.5 per cent higher than Monday’s close.

His one word of caution is to watch out for market turbulence: “There’s going to be continued rhetoric from the elections in the U.S. and money coming back, and informed portfolios questioning whether emerging markets will come back. So I think there’s going to be some volatility.”

Even so, Belski’s confident Canada’s stock market will have another annual climb. “We have one of the strongest markets in the world here in Canada. And I believe the majority of global investors have completely missed it,” he said.