Canadian stocks sunk to their lowest point since March 2021 after the Bank of Canada announced its largest interest rate hike since 1998.

The S&P/TSX Composite Index dropped as much as 1.6 per cent after the nation’s central bank lifted interest rates by 100 basis points on Wednesday, a surprise move as economists expected a 75 basis-point hike. Governor Tiff Macklem boosted the central bank’s policy rate to 2.5 per cent in an attempt to tamper four-decade high inflation. 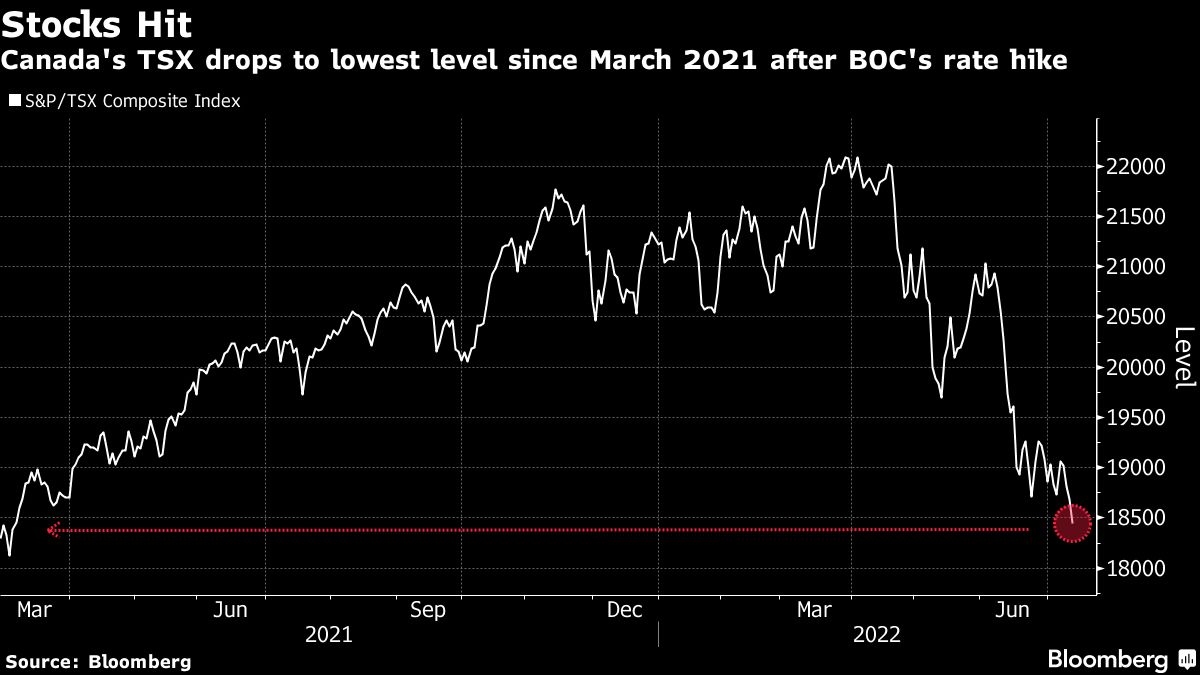 Bank of Canada’s unexpected supersized rate increase sets the stage for the Federal Reserve to continue on its aggressive interest rate path later this month after a hotter-than-expected inflation report in the US was released Wednesday. The S&P 500 Index is 0.3 per cent lower after falling as much as 1.6 per cent earlier.

“Its great to see central banks finally waking up and trying to get ahead of this,” Greg Taylor, chief investment officer at Purpose Investments. “This should be looked at as good news but markets hate surprises and this caught a lot of people off guard.”

Banks and insurers drove the selloff as the S&P/TSX Financials Sector Index tumbled as much as 2.4 per cent, the most in one month. The sector also hit its lowest point since March 2021, and has now fallen more about 20 per cent from its record high in February. While rising interest rates tend to bolster bank net interest margins, concerns over a potential recession and pressure on mortgages and other loans have weighed on lenders. Consumer staples and materials stocks were the only gainers in a sea of green and investors piled into the recession proof.

Canada’s market has staved off deeper losses this year as investors rotated into value stocks and away from growth amid surging commodity prices. That however has stalled as concerns about a looming recession added to the wall of worry for investors facing higher fuel and food costs amid geopolitical tensions. The TSX has slumped about 13 per cent this year, while the tech-heavy S&P 500 Index tumbled 20 per cent.